One shot enough against swine flu, US studies confirm 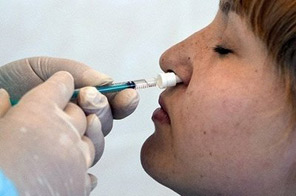 A Russian doctor inoculates a volunteer patient against the A(H1N1) "swine flu" virus with a test vaccine at a clinic in St. Petersburg. The New England Journal of Medicine reported clinical trials in Australia revealed that a single shot will be enough to immunize against swine flu. Source: AFP

WASHINGTON: A single dose of vaccine could be enough to immunize adults against swine flu, a top US health official said Friday, allaying fears of a scramble for a tight supply of shots when flu season returns.

"Preliminary data from our trials indicate that a single 15-microgram dose of vaccine is well tolerated and induces an immune response in most healthy adults," said Anthony Fauci, director of the National Institute of Allergy and Infectious Diseases at the National Institutes of Health (NIH).

Results of NIH-sponsored clinical trials which began last month showed that a swine flu vaccine produced by French pharmaceutical giant Sanofi Pasteur produced "a robust immune response" in 96 percent of adults aged 18 to 64 after "the rather short time point of eight to 10 days after vaccination," Fauci said.

Among people over 65, a smaller percentage of trial volunteers showed a robust immune response, but Fauci said that was "expected as it is also the case with seasonal flu vaccine."

The rapid immune response found in the NIH-backed trials was "very good news for the vaccination program, both with regard to the supply of vaccine as well as its potential efficacy," said Fauci.

Scientists had assumed that two doses would be required to immunize people against swine flu and were scrambling to develop enough vaccines to inoculate at least the most at-risk populations before the northern hemisphere flu season begins with the return of cooler weather.

US Health Secretary Kathleen Sebelius was encouraged by the findings.

"Based on the previous assumption that everyone would need two doses, we thought that even those people who were getting the H1N1 vaccine wouldn't be fully immunized until Thanksgiving," the US holiday that falls on the fourth Thursday in November, said Sebelius.

The new finding "shortens the window of worry and more people can be protected much earlier," she said.

Swine flu has claimed more than 3,000 lives around the world since it was first reported in Mexico in April. Unlike the seasonal flu, the virus has hit younger people and people with an underlying health condition harder than the elderly.

The US Centers for Disease Control and Prevention (CDC) has recommended that pregnant women, people in contact with infants, medical personnel, people between the ages of six months and 24 years old, and adults under the age of 65 with underlying medical conditions should be the first to get the shots.

That is about 160 million people in the United States -- but no more than 52 million doses of the vaccine are expected to be available, and only after mid-October, officials have said.

He cited a report published Thursday in the New England Journal of Medicine which said that trials on CSL Biotherapies' swine flu vaccine indicated that a single, 15-microgram dose was sufficient to inoculate most adults against the A(H1N1) virus.

Nearly all of the 120 people given a 15-microgram dose of the CSL H1N1 vaccine showed a "robust immune response", the report said.

Swine flu has claimed more than 2,100 lives worldwide since an outbreak was first reported by the World Healthy Organization in Mexico in April.

#One shot enough against swine flu #US studies confirm
Stay in touch!