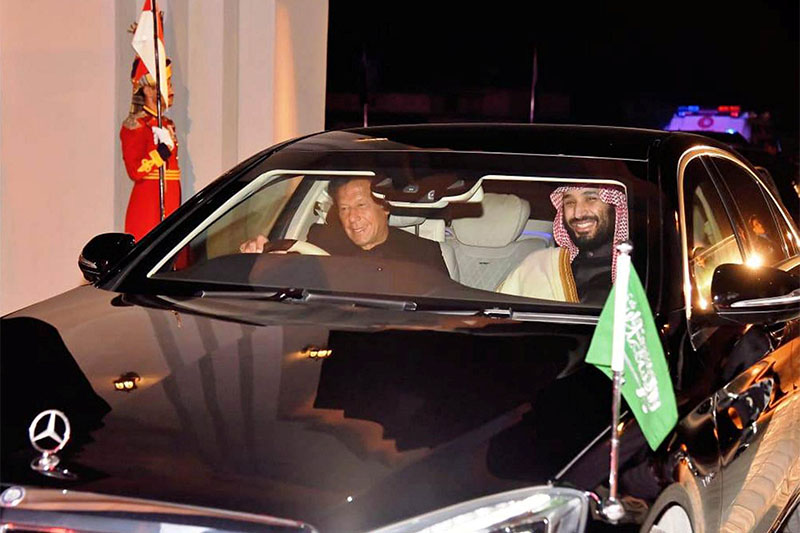 Pakistani Prime Minister Imran Khan (L) drives a vehicle as he receives Saudi Arabia's Crown Prince Mohammed bin Salman on his arrival at Pakistan Air Force (PAF) Nur Khan Base in Rawalpindi, Pakistan February 17, 2019. Photo: Reuters
ISLAMABAD: Saudi Arabia's Crown Prince Mohammed bin Salman has ordered the release of about 2,100 Pakistani prisoners from the kingdom's jails during a high-profile visit to Islamabad, Pakistan's information minister said on Monday. Prince Mohammed arrived in Pakistan on Sunday at the beginning of an Asian tour, which will include China and is seen as an attempt by him to rebuild his reputation after the murder of Saudi critic and journalist Jamal Khashoggi. Saudi Arabia on Sunday signed investment agreements with Pakistan worth $20 billion. The crown prince had "ordered the immediate release of 2,107 Pakistani prisoners", after a request by Pakistani Prime Minister Imran Khan, Information Minister Fawad Chaudhry said in a post on Twitter. The fate of thousands of Pakistani workers locked up in jails across the Middle East is a sensitive issue in Pakistan, where there is a perception the prisoners are mostly poor labourers who have no real legal recourse. Huge numbers of Pakistanis travel to the Middle East every year, with many working on construction sites or as domestic helpers. The remittances they send back are vital for Pakistan's dollar-starved economy. Saudi Arabia has yet to comment on the Pakistani announcement of a prisoner release. The crown prince's visit marks a deepening of ties between allies whose relationship has in the past centred on oil-rich Saudi Arabia backing Pakistan's economy during difficult periods, and in return Pakistan's powerful army lending support to Saudi Arabia and its royal family. As the guardians of most holy sites in the birthplace of Islam, the Saudi royal family carries vast religious influence in Pakistan, a staunchly conservative and mostly Muslim country of 208 million people. Saudi Arabia has in recent months helped keep Pakistan's economy afloat by propping up rapidly dwindling foreign reserves with a $6 billion loan, giving it breathing room as it negotiates a bailout with the International Monetary Fund. Pakistan has shown appreciation by treating Prince Mohammed's trip as the biggest state visit since one by Chinese President Xi Jinping in 2015, soon after Beijing announced plans to invest tens of billions of dollars on infrastructure in Pakistan as part of China's Belt and Road initiative. Many in the West blamed Prince Mohammed for the killing of the journalist Khashoggi in the Saudi consulate in Istanbul in October. The murder triggered the kingdom's biggest political crisis for a generation. The crown prince has denied being involved.
#Saudi Arabia #Imran Khan #Mohammed bin Salman #Jamal Khashoggi #Pakistani prisoners
Stay in touch!