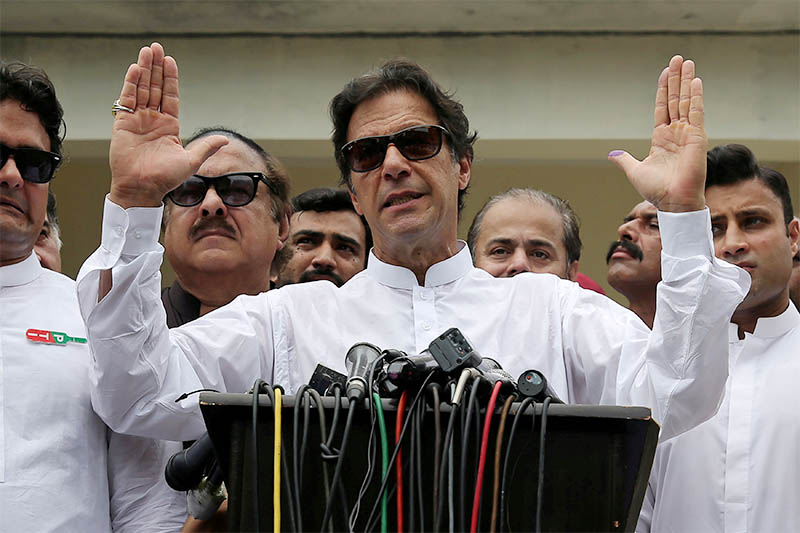 FILE: Cricket star-turned-politician Imran Khan, chairman of Pakistan Tehreek-e-Insaf (PTI), speaks to members of media after casting his vote at a polling station during the general election in Islamabad, Pakistan, July 25, 2018. Photo: Reuters
ISLAMABAD: Pakistan's prime minister and president on Tuesday offered support for rebels in the Indian part of the disputed Himalayan territory of Kashmir as the country staged rallies marking the annual Day of Solidarity with Kashmir. Rallies were also held in the Pakistani-controlled sector of the territory while a Pakistani minister declared the struggle of the rebels in Kashmir a jihad, or Muslim holy war, saying it would go on until Kashmir becomes part of Pakistan. India and Pakistan each administer a part of Kashmir, but both claim the territory in its entirety. Rebels have been fighting Indian rule since 1989, demanding Indian-controlled Kashmir be united either under Pakistani rule or established as an independent country. Pakistani Prime Minister Imran Khan and President Arif Alvi in their statements condemned India for what they said were violations of human rights in the Indian section of Kashmir. They said Pakistan would continue its "diplomatic and moral" support for people living in Kashmir. "The wish of Kashmiri people for freedom cannot be suppressed," Alvi told lawmakers in the Pakistani-controlled part of Kashmir. In Islamabad, Ali Amin Gundapur, a minister in charge of Kashmir affairs, told a rally that "one day, Kashmir will become part of Pakistan." Army spokesman Maj. Gen. Asif Ghafoor tweeted that decades of "atrocities by Indian occupied forces have failed to suppress ever strengthening freedom struggle" of the Kashmiris. At a rally in Peshawar, protesters burned and stomped on the Indian fag as Pakistani girls in traditional Kashmiri dress chanted anti-Indian slogans. And at a pro-Kashmir rally in the eastern city of Lahore, Pakistani radical cleric Hafiz Saeed, suspected in the 2008 Mumbai terror attacks that killed 166 people and also wanted by the U.S., urged followers to stand up against India's crackdown on "unarmed civilians in Kashmir." There was no immediate comment from New Delhi on the statements from Islamabad. On Sunday, India's Prime Minister Narendra Modi paid a day-long visit to the Indian section of Kashmir as separatists there called for a shutdown — shops and businesses closed while thousands of armed government forces and commandos spread out and closed off roads with razor wire and iron barricades to prevent protests and rebel attacks during Modi's visit.
#Narendra Modi #Imran Khan #Indian Kashmir #Pakistan-India relations #Ali Amin Gundapur
Stay in touch!