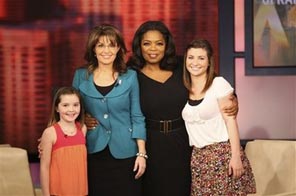 NEW YORK: Sarah Palin wouldn't reveal her political plans for 2012 in an interview with Barbara Walters, but when asked whether she'd play a major role replied that "if people will have me, I will."
The former Republican vice presidential candidate said that election isn't even on her radar screen.
"My ambition, if you will, my desire is to help our country in whatever role that may be, and I cannot predict what that will be, what doors will be open in the year 2012," she told Walters.
Palin is making the rounds to promote her new book, "Going Rogue," which will be released Tuesday.
On Monday, she appeared on the "The Oprah Winfrey Show," and ABC released excerpts of the interview with Walters that will begin airing on newscasts Tuesday.
The former Alaska governor said she'd rate President Barack Obama's performance a 4 out of 10. She criticized the president for his handling of the economy and for "dithering" on national security questions.
"There are a lot of decisions being made that I — and probably the majority of Americans — are not impressed with right now," she said on ABC.
The title of Palin's book refers to a phrase John McCain's campaign used to describe his vice presidential running mate going off message. In the book, she criticizes the people who ran McCain's campaign and says she wished she had been allowed to speak more freely. But she told Walters the outcome probably would not have been different if she had.
"The economy tanked," she said. "(The) electorate was ready, sincerely, for change."
Palin said she's gotten plenty of offers during the past few months, including to open up her family for a reality show, that she has rejected. She also said she wasn't sure whether a talk show would be best for her family. "I'd probably rather write than talk," she said.
During her interview with Winfrey, which was taped last week, Palin said that it's heartbreaking to see the road that Levi Johnston, the father of her grandson, has taken and that the soon-to-be Playgirl model hasn't seen his baby in a while.
Palin and Winfrey also talked about the controversy surrounding Palin's possible appearance on the show last year. The two women embraced as Palin walked onto the talk show stage.
The new memoir doesn't mention Johnston, who has sparred repeatedly with his former mother-in-law-to-be. Johnston and Palin's daughter, Bristol Palin, are parents to son, Tripp.
When Winfrey asked about Johnston, Palin said she didn't think "a national television show is the place to discuss some of the things he's doing and saying."
But Palin went on to say she finds it "a bit heartbreaking to see the road that he is on right now" and that "it's not a healthy place to be."
Bristol Palin and her son live at Palin's home, she said, and have much family support.
"(Johnston's) quite busy with his media tours and he hasn't seen the baby for a while," Palin said. "But we will let that be the discussion between Bristol and Levi as they work out their relationship."
Palin also said Johnston remains a member of the family and that they can work out any troubles. She said she prays for him and that he has an "open invitation" to Thanksgiving dinner.
Winfrey began the interview by asking Palin if she felt snubbed at not getting an invitation to "The Oprah Winfrey Show" last year. Winfrey said she didn't have any candidates on her Chicago-based show during the campaign because of her support for President Barack Obama.
Palin said she didn't feel snubbed and told Winfrey, "No offense to you, but it wasn't the center of my universe."