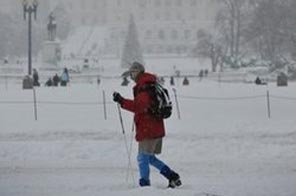 A skier passes infront of the Capitol under heavy snowfall on December 19 in Washington, DC. Source: AFP

WASHINGTON: The US capital paid prison inmates to shovel sidewalks, crosswalks and bus stops after the biggest December blizzard in the city's history, the Department of Corrections said Thursday.
Two work crews comprising some 20 prisoners convicted of minor offenses were deployed around the city December 18 and 19, along with two prison guards to watch over them, DOC spokesman Michon Parker told AFP.
Each inmate was paid 7.50 dollars per hour for their work, he added.
The December 18-19 snowstorm dumped 60 centimeters (24 inches) of snow on the city, the heaviest on record in the month of December.
The DOC did not say which Washington locations benefited from the snow shoveling service.
It said it was part of a rehabilitation program signed with city authorities in 2008 that pays inmates to clean buildings, remove trash and debris and mow grass.

#Prisoners used to shovel snow-bound US capital
Stay in touch!