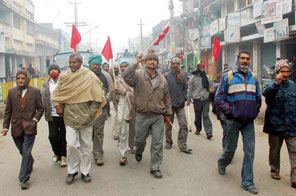 BIRGUNJ: Protesting against federalism, Rastriya Janamorcha Nepal (RJN) called a bandh in Nararayani zone on Wednesday. Normal life in the five districts of the zone has been affected due to the bandh.
The protesters have been blocking the roads in Birgunj by burning tyres on the roads and staging protest by organising a rally.
According to the Traffic Police Office, Pathalaiya few vehicles are running on Tribhuvan Highway along Pathalaiya, Birgunj.
They added that Industries, marketplaces and education institutions in the districts remained shut while vehicles stayed off the roads in Bara, Gaur, Hetauda and Chitwan.
Accoding to Acche Lal Shah, coordinator of RJN, Parsa they called the bandh to institutionalise and strengthen the republic, protect the nationality and create awareness against federalism.
Earlier, the RJN had called bandh in Gandaki, Dhaulagiri, Bheri, Karnali, Lumbini, Rapti, Seti and Mahakali zones protesting against federalism.
The RJN have been demonstrating against federalism since December 27.