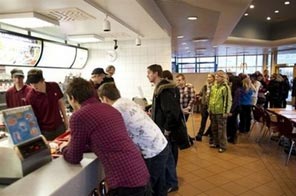 Consumers flock to a McDonald's fast-food reastaurant in Reykjavik. Noisy crowds, long queues, and traffic jams plunged McDonald's restaurants in Iceland into a state of siege Saturday, as the chain served its final burgers on the island. Source: AFP

REYKJAVIK: Noisy crowds, long queues, and traffic jamsplunged McDonald's restaurants in Iceland into a state of siege Saturday, as the chain served its final burgers on the island.
Icelanders flooded the three branches of the US fast-food restaurant in Reykjavik several hours before the outlets shut for the last time, forced to close after the island's economic collapse caused running costs to soar.
Extra staff were deployed to reinforce the outlets, whose disappearance after 16 years means Iceland will be one of the few Western countries without a presence of the ubiquitous eatery.
Customers in one branch faced a 20-minute wait to be served and snaking lines of cars caused traffic jams at the drive-in.
"I have worked here for six years, and I have never worked as hard as in these final days," one staff member told AFP.
Jon Gardar Ogmundsson, who heads the firm Lyst which operates the Icelandic branches, said at one point there was even a shortage of the chain's trademark Big Mac burger.
"We are here to say goodbye," said Orri Hreinsson, who was sitting with two friends at a table covered with 12 cheeseburgers.
Ogmundsson announced on Monday the closure of the McDonald's branches as a result of the dramatic economic collapse last year, which pushed the country to the brink of bankruptcy.
McDonald's requires all resources for its restaurants, including packaging, meat, vegetables and cheese, to be imported as the Icelandic market is too small to produce the required products.
Ogmundsson said the restaurants imported their goods from Germany, but costs had doubled because the country's falling krona currency had made imports prohibitively expensive.
He plans to run the restaurants under another name in order to be able to buy cheaper Icelandic products.