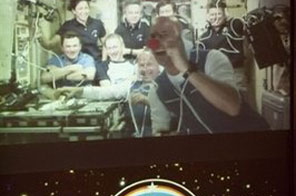 NASA photo shows Guy Laliberte in the foreground onboard the International Space Station. A Russian Soyuz capsule carrying the Canadian circus tycoon has reportedly undocked from the ISS and taken course for Earth. Source: AFP

MOSCOW: A Russian Soyuz capsule carrying Canadian circus tycoon Guy Laliberte undocked from the International Space Station (ISS) and took course for Earth on Sunday, space officials said.
The capsule, also carrying Russian cosmonaut Gennady Padalka and US astronaut Michael Barratt, was expected to land in Kazakhstan's steppe at around 0430 GMT.
"The team's health and mood, as well as those of the space tourist, are good. Now what is important is for everyone to normally go through landing," the spokesman for Russia's mission control in Moscow's suburb of Korolyov said.
Laliberte is the billionaire founder of the popular Cirque du Soleil and the seventh person in history to spend millions of dollars from a personal fortune to fly into space.
The Canadian, who arrived at the ISS on October 2, could be the last space tourist for some time as seats will be limited aboard the Soyuz once NASA takes its long-serving shuttles out of service from 2010.
The Cirque du Soleil, which Laliberte founded in 1984, fuses acrobatics with music and has made him the world's 261st richest man with a fortune of 2.5 billion dollars, according to Forbes magazine.