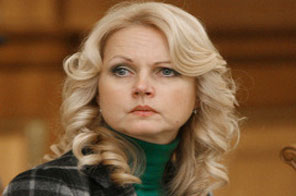 "The topic of reducing abortions is definitely on today's agenda. This won't solve the birthrate problem 100 percent, but around 20 to 30 percent," Health Minister Tatyana Golikova said, quoted by Russian news agencies.

Golikova said that in 2008 there were 1.714 million births in Russia and 1.234 million abortions. Russia has long had one of the world's highest abortion rates.

Russia's population fell precipitously after the 1991 collapse of Communism, dropping from around 148 million then to some 142 million today due to various factors including economic difficulties and high alcoholism rates.

The government has taken a range of measures to fight the population decline including paying money to mothers for having babies and awarding medals of "parental glory" to parents of many children.

In late December, Prime Minister Vladimir Putin announced that Russia in 2009 had experienced its first annual population increase since 1995.