Shanghai activists save cats from being eaten 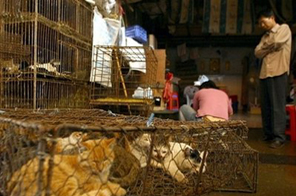 Cats are seen in cages for sale at a meat market in Guangzhou, in southern China. Source: AFP

SHANGHAI: Animal activists in Shanghai have rescued 300 cats from a dealer who had bought the allegedly stolen pets for sale to restaurants in southern China, according to state media.

The activists, acting on a tip from a cat lover, found 22 bamboo cages full of cats in a freight yard, from where they were to be shipped to Guangdong province, the Shanghai Daily reported.

Most of the animals were returned to their owners, but three cats were found dead and some had broken legs, the report said.

"The cats are abused. They throw the cages on to a truck instead of loading them properly. The cats that survive end up in soups at restaurants," Lai Xiaoyu, an activist involved in Friday night's rescue told the newspaper.

Restaurants pay about 50 yuan (7.31 dollars) a cat, according to the report.

Police detained the cat dealer, Yang Baoguo, after he battled dozens of animal lovers who descended on the freight yard to break his cages, the newspaper said.

The dealer was released after a few hours without charge because animal protection laws are nonexistent in China, the report said.

"There is no law in China saying cats cannot be eaten," police officer Ma Yong was quoted as saying. "Cats are not a protected animal."

Yang, who has traded cats for a decade, bought the animals from so-called hunters who trapped the cats in residential areas at night, the report said.

Police could not charge him with possessing stolen property because, unlike dogs, a licence is not required for owning a cat in Shanghai, making ownership impossible to prove, the report said.

Eating cat meat is a tradition in many parts of China, especially in southern regions, where some restaurants specialise in preparing the dishes, according to Chinese media reports.

#Shanghai activists save cats from being eaten
Stay in touch!