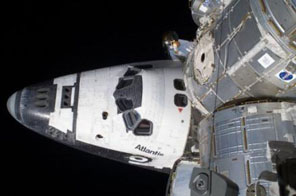 HOUSTON: Favorable weather conditions awaited the shuttle Atlantis and its seven-astronaut crew on their expected return to Earth Friday, after a successful 11-day mission to the International Space Station.
The shuttle was expected to touch down at NASA's Kennedy Space Center in Florida at 1444 GMT under mostly sunny skies, the US space agency said Thursday.
The shuttle crew awoke on Friday at 0628 GMT to strains of Motley Crue's rock ballad "Home sweet home."
"Atlantis is in great shape," said NASA flight director Bryan Lunney, who will supervise the descent from mission control here. "The crew is in great shape. The weather is looking really good."
The shuttle crew, returning from one of NASA's few remaining shuttle missions, delivered and equipped the orbiting science laboratory with nearly 30,000 pounds of spare parts.
Most of the large gyroscopes, thermal control system components and other external gear is intended to sustain operations of the station by a US-led partnership of 14 nations well beyond the shuttle's approaching retirement.
"We got a lot accomplished," Atlantis commander Charlie Hobaugh told ABC News earlier as the astronauts finished a traditional Thanksgiving Day meal that included pre-packaged smoked turkey and cornbread dressing. "It was a fantastic mission," he added.
The astronauts prepared power, cooling and airway connections on the ISS for the arrival of the final habitable US module, Tranquility, which is named for the lunar landing site of the Apollo 11 mission. It is scheduled for a February launch.
NASA's shuttle fleet, the only spacecraft large enough to transport the space station's largest spare parts, is facing retirement in late 2010.
While space station operations are set to continue through 2015, President Obama is considering an option offered by a White House advisory panel and favored by Congress to extend activities aboard the orbital outpost through 2020.
"We accomplished all of our major objectives and then some," said Dan Hartman, NASA's deputy space station program manager, as the Atlantis crew finished its work. "We feel pretty confident about how far that can get us."
On the eve of their return to Earth, Hobaugh's crew carried out a successful checkout of the steering and communications systems activated for the landing.
In NASA's Mission Control here, imagery experts declared the shuttle's fragile shielding ready to withstand the heat buildup that accompanies the spacecraft's high speed descent into Earth's atmosphere.
Atlantis heads back to Earth with one more astronaut than it launched with, as Nicole Stott ends a 91-day mission aboard the orbital outpost. A second astronaut, Randy Bresnik, is also eager to return to Earth to see a daughter who was born while he was between spacewalks.
Bresnik's wife, Rebecca, gave birth to daughter Abigail Mae on Saturday.
"I can't imagine anyone wanting to miss their child's birth, but hopefully when she is older she will forgive me for being absent," said Bresnik, who had launched with assurances from NASA that he could monitor his wife's labor through mission control.
In addition to the astronauts, Atlantis is also returning with a six surviving mice that have been aboard the station since August. The rodents served as subjects in an experiment examining the loss of bone and muscle tissues that accompanies long exposures to weightlessness.
Half of the rodents originally pegged for the study died during their stay in space.
On Tuesday, European Space Agency astronaut Frank De Winne handed over command of the station to Jeff Williams, a veteran NASA astronaut who arrived at the space station in October.
De Winne, Russian cosmonaut Roman Romanenko and Canadian astronaut Robert Thirsk are due to leave the station for return to Earth aboard a Russian Soyuz capsule on December 1 after 188 days in space.

#Shuttle crew prepares for return to Earth
Stay in touch!