Small is fatal for songbirds in Britain 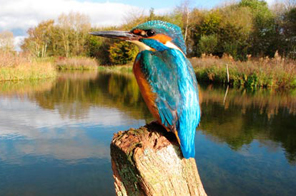 LONDON: Few people may have been wanting more evidence of the ferocity of recent weather. Nevertheless they got one from an unexpected source last week: the Big Garden Birdwatch. Organised by the Royal Society for the Protection of Birds (RSPB), it involved members of the public reporting bird sightings in their gardens over the last weekend in January. More than half a million responses were received and a count showed precisely how this year's winter – the coldest in 30 years – has taken a toll of the nation's small songbirds, such as the goldcrest and the coal tit.

"The problem is particularly severe for birds with small bodies," said Graham Madge of the RSPB. "The smaller it is, proportionally the more heat it loses when the weather gets cold and the more food it needs to retain heat. However, food – for example, insects – is difficult to find if the ground is frozen."

Goldcrests were particularly badly affected, the bird count found, with numbers plunging by 75% on last year. Long-tailed tits were down by 27% while the coal tit was down 20%. It was also found that kingfishers – though technically not a songbird – have been badly affected by the freezing weather. Numbers are noticeably down, according to most anecdotal evidence, said Madge: "Kingfishers have not just got small bodies, they have to immerse themselves in water to catch fish. They get soaked in near-freezing water."

The nature of the problem was also highlighted by Sarah Kelly, the survey's co-ordinator. "Smaller birds have to eat for more of their waking time as the temperature drops, and during hard frosts and snow cover often have to feed from dawn until dusk," she said. "Many smaller birds will be in trouble if they fail to find food even for a day."

The survey also revealed that many populations, such as the redwing and the fieldfare, shifted west across Britain to avoid the worst of the cold, which has affected the east over recent months.

However, most of the birds badly affected by the cold are fairly plentiful in Britain and populations are likely to recover, though it may take several years for numbers of kingfishers and goldcrests to recover. More worrying, says the RSPB, is the impact that the freezing weather will have on rarer birds, which are unlikely to appear in gardens and whose numbers are therefore far harder to assess.

Of particular concern are the bittern and the Dartford warbler. "The population of the Dartford warbler was down to around 10 males in the 1960s but has made a comeback recently," added Madge. "However, it is now looking as if it has taken a bad hit this winter and it is quite possible some local populations will have been snuffed out."

The bittern, whose population reached a record 82 males last year, is also likely to have been badly affected. "It is going to be an anxious time until we can get out on reserves and start counting numbers," added Madge.

The RSPB added that the impact had been particularly severe because the freeze had gripped the whole of the country. In the past, drops in small bird populations caused by cold weather have typically been regional, such as the death of all the Cetti's warblers in Kent after two successive cold winters in the mid-1980s. This year the impact has spread far wider, though the RSPB will not be able to properly assess the situation until breeding seasons for particular species have ended.

#Small is fatal for songbirds in Britain
Stay in touch!