Soggy June for many in US 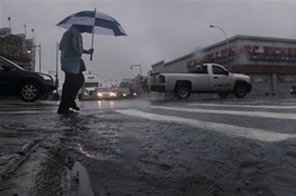 A pedestrian shelters under an umbrella while walking around a puddle during heavy rainfall in Brooklyn, New York, Thursday June 18, 2009. Forecasters at the National Weather Service warned that up to 2 inches of rain could fall Thursday. From North Dakota to New York's Long Island, rain after rain after rain has dampened spirits, swamped roads and delayed sports this spring. Source: AP

WASHINGTON: Mud season has been extended. From North Dakota to Long Island, rain after rain after rain has dampened spirits and swamped roads. Picnics and kids' baseball games have been washed out, rescheduled and rained out again. Big-time sports, too.
• In Farmingdale, N.Y., Tiger Woods' defense of the U.S. Open championship was delayed Thursday as rain pelted an already soaked course and postponed most of the first round until Friday. "Where's my canoe," England's Ian Poulter wrote on his Twitter feed.
• In Bismarck, N.D., heavy rain swamped streets, stressed storm sewers and stalled vehicles. Roads were shut down, and the roof of a bowling alley collapsed under the weight of water.
• Rainfall has totaled 5.32 inches so far this month in New York's Central Park, more than double the normal 2.17 inches for the period.
"This has been a very rainy spring," observed Victoria Cahn, 27, dodging puddles on a lunch run from her office on the University of Pennsylvania campus. "Usually in June we have the air conditioning on half the time at least."
The lifelong Philadelphia resident said, "I'm a volunteer sailor on the (1883 tall ship) Gazela ... and we've been trying to find dry time to work outside on the weekends, and it just hasn't been there we always find ourselves interrupted by a thunderstorm or two."
The City of Brotherly Love has sloshed through 3.40 inches of rain so far this month, far above the 1.81 normal reading.
In Hartford, Conn., where there has been 3.61 inches of rain this month, compared to a normal of 2.26, Jennifer Potter, en route to work, said: "I wish I were in Florida. I like the sun and the beach, not all this rain."
Other people said they are baffled by the frequent downpours this month as well. Folks in the Northeast and upper Midwest are used to "mud season," a period when winter's frozen ground has thawed and has yet to be dried out by sunny days. But not into late June.
"This is not typical June weather," said Sacha Kelly, of Hartford, a 29-year-old teacher who huddled under an umbrella with daughter, Aleema, 5. "I would expect it to be more sunny."
What's going on?
The high-altitude jet stream that guides the movement of weather across the country has been south of its normal position over the last couple of weeks, sending a series of storms across the Midwest and East, explained meteorologist Ed O'Lenic of the federal Climate Prediction Center.
"It's a lot like an extended spring," said O'Lenic in a telephone interview. "For whatever reason, and the atmosphere only knows the answer, this is the way it is being acted out."
While calendars say summer begins on Sunday, that refers to astronomical summer. Meteorological, or weather summer, began June 1.
Parts of New Jersey, Delaware, Maryland and eastern Pennsylvania have received rain totals 1.5 to 3.75 inches greater than normal for the past two weeks, according to the Northeast Regional Climate Center at Cornell University in Ithaca, N.Y.
One possible reason is "persistence," said Kathryn Vreeland, a climatologist at the center.
Sometimes a weather pattern just persists, she said, "just hangs out there until something comes along to make things happen differently."
Said O'Lenic: "For some reason people have this feeling that they ought to be able to remember, in their lifetime, something similar" to what is happening. "That is not the way it works. There is a lot of natural variability."
Just ask Seattle. People in that normally damp city are going through a near-record spring dry spell, boosting the threat of wildfires in western Washington state.
Could El Nino be at fault?
"Good question," says O'Lenic. El Ninos are periodic weather phenomena that develop in the Pacific. It looks as if one is developing, but it's not under way yet.
Or maybe global warming?
"The answer is, we don't know," O'Lenic says. But, he adds, "It's unlikely that any particular weather system can be attributed to climate change."
Perhaps it's simply time to turn to Creedence Clearwater Revival:
"Long as I remember, the rain been comin' down,
"Clouds of myst'ry pourin', confusion on the ground,
"Good men through the ages, tryin' to find the sun,
"And I wonder, still I wonder, who'll stop the rain."

#Soggy June for many in US
Stay in touch!