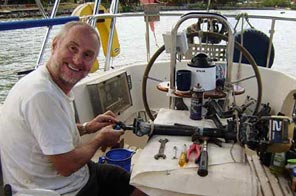 Paul Chandler on board the Lynn Rival in an undated photograph. Source: Associated Press

LONDON: Somali pirates holding a British couple kidnapped from their yacht have demanded a ransom of seven million dollars (4.7 million euros) to set them free, Britain's Foreign Office said Friday.
"We're aware of it, we can confirm it," a spokesman said after the BBC played a tape of what it said was a spokesman for the pirates outlining their ransom demands for Paul and Rachel Chandler.
The BBC tape featured a man's voice saying: "If they do not harm us, we will not harm them. We only need a little amount of seven million dollars".
The Chandlers were sailing off the Somali coast on their yacht the Lynn Rival when they were captured last Friday.
They are now thought to be being held in a Singapore-flagged container ship which was seized by pirates earlier this month.
The Foreign Office spokesman could not say what Britain's next steps would be as it tries to free the Chandlers, or whether a negotiator was in place. Britain's stated policy is not to pay ransoms in such situations.
Paul Chandler's brother-in-law Stephen Collett has previously insisted that the couple are "not rich people" and that most of their money is tied up in their yacht.