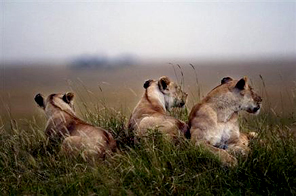 Lionesses rest in the bushes of the Masai-Mara Game reserve in Kenya Source: AFP

NAIROBI: Conservation groups have unveiled several life-size statues of lions in the Kenyan capital to highlight the plight of the regal animal, whose numbers have been decimated in the past 30 years.
Lions now number just over 2,000 individuals, according to the Kenya Wildlife Service. That compares to 2,749 lions seven years ago and some 30,000 back in the 1970s.
Conservationists estimate that unless the current rate of decline is checked, the lion will be extinct in Kenya by 2030.
WildlifeDirect this week put up one lion statue in a top-end shopping mall in Nairobi as part of a drive to get Kenyans to pressure parliament to adopt a law banning the import of the agricultural pesticide Furadan.
The NGO says this poison is widely used by herders to kill lions suspected of having attacked livestock.
"With the life-sized lion statue ... WildlifeDirect seeks to rally support from prominent Kenyans and the general public to have the deadly carbofuran class of pesticides banned from the Kenyan market by the Kenyan Parliament", the NGO said Friday.
A series of other lion statues went up across the city this week, some financed by other conservation groups and others by corporations.