Study: Breast-feeding would save lives, money 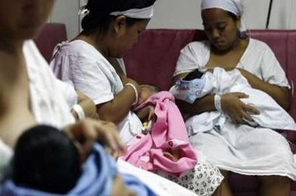 Mothers breast feed their newly born babies inside the Neonatal Intensive Care Unit (NICU) at the Fabella hospital in Manila March 16, 2010. Breast feeding advocates have tied up with a high-IQ (Intelligence Quotient) organization to debunk the claims of infant formula makers whose advertisements claimed that their products will increase a child's intelligence, local newspaper reported on Tuesday. Source: AFP

CHICAGO: The lives of nearly 900 babies would be saved each year, along with billions of dollars, if 90 percent of U.S. women breast-fed their babies for the first six months of life, a cost analysis says.
Those startling results, published online Monday in the journal Pediatrics, are only an estimate. But several experts who reviewed the analysis said the methods and conclusions seem sound.
"The health care system has got to be aware that breast-feeding makes a profound difference," said Dr. Ruth Lawrence, who heads the American Academy of Pediatrics' breast-feeding section.
The findings suggest that there are hundreds of deaths and many more costly illnesses each year from health problems that breast-feeding may help prevent. These include stomach viruses, ear infections, asthma, juvenile diabetes, Sudden Infant Death Syndrome and even childhood leukemia.
The magnitude of health benefits linked to breast-feeding is vastly underappreciated, said lead author Dr. Melissa Bartick, an internist and instructor at Harvard Medical School. Breast-feeding is sometimes considered a lifestyle choice, but Bartick calls it a public health issue.
Among the benefits: Breast milk contains antibodies that help babies fight infections; it also can affect insulin levels in the blood, which may make breast-fed babies less likely to develop diabetes and obesity.
The analysis studied the prevalence of 10 common childhood illnesses, costs of treating those diseases, including hospitalization, and the level of disease protection other studies have linked with breast-feeding.
The $13 billion in estimated losses due to the low breast-feeding rate includes an economists' calculation partly based on lost potential lifetime wages — $10.56 million per death.
The methods were similar to a widely cited 2001 government report that said $3.6 billion could be saved each year if 50 percent of mothers breast-fed their babies for six months. Medical costs have climbed since then and breast-feeding rates have increased only slightly.
About 43 percent of U.S. mothers do at least some breast-feeding for six months, but only 12 percent follow government guidelines recommending that babies receive only breast milk for six months.
Dr. Larry Gray, a University of Chicago pediatrician, called the analysis compelling and said it's reasonable to strive for 90 percent compliance.
But he also said mothers who don't breast-feed for six months shouldn't be blamed or made to feel guilty, because their jobs and other demands often make it impossible to do so.
"We'd all love as pediatricians to be able to carry this information into the boardrooms by saying we all gain by small changes at the workplace" that encourage breast-feeding, Gray said.
Bartick said there are some encouraging signs. The government's new health care overhaul requires large employers to provide private places for working mothers to pump breast milk. And under a provision enacted April 1 by the Joint Commission, a hospital accrediting agency, hospitals may be evaluated on their efforts to ensure that newborns are fed only breast milk before they're sent home.
The pediatrics academy says babies should be given a chance to start breast-feeding immediately after birth. Bartick said that often doesn't happen, and at many hospitals newborns are offered formula even when their mothers intend to breast-feed.
"Hospital practices need to change to be more in line with evidence-based care," Bartick said. "We really shouldn't be blaming mothers for this."

#money #Study: Breast-feeding would save lives
Stay in touch!