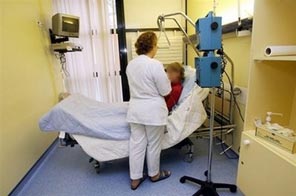 Photo illustration of a nurse preparing a patient for chemotherapy at a hospital in Lille. Source: AFP

VANCOUVER: People with cancer who are depressed are more likely to die than are patients with good mental health, psychologists reported Monday in the science journal Cancer.
The study reported that death rates from cancer "were up to 25 per cent higher in patients experiencing depressive symptoms and up to 39 per cent higher in patients diagnosed with major or minor depression."
"In both of those groups, you can predict cancer mortality," lead researcher Jillian Satin, of the University of British Columbia here, told AFP.
While the study?s main conclusion is a call for more research on the links between cancer and mental health, Satin said the results also proves the link is significant.
"I think depression should always be taken seriously," she added. "It would be my wish that this line of research fuels adding psychological social treatment into standard cancer care."
The study by Satin and co-authors Wolfgang Linden and Melanie Phillips was an overview, called a meta-analysis, of 26 previous studies on the effect of depression on the progression of cancer and survival rates in of 9,417 patients.
Satin said the researchers controlled for the chicken-or-egg factor: Do people become depressed because they are sick with cancer? Or does cancer kill them more often when they have depression independent of the cancer?
"That?s the million-dollar question," she said. "Even after correcting for that, we still see the positive relationship between depression predicting mortality."
But Satin warned, "I want people to be cautious about this. We have not shown that depression itself causes mortality -- but we have a suggestion that this is possible."
Satin cautioned against trying to match a specific patient?s likelihood of death with the startling finding that death rates can be up to 39 per cent higher with depression that is serious enough to be diagnosed.
"I know people want to know numbers, but I find them kind of misleading," she said. "What this is saying is that somebody?s depressive status shortly after they are diagnosed with cancer predicts cancer outcomes."
The published study said its goal was to to determine whether empirical evidence supports the widespread belief by both the public and cancer specialists that a patient?s state of mind affects the outcome of disease.
"The field of psycho-oncology has experienced exponential growth," noted the study. "Eighty-five percent of cancer patients and 71.4 per cent of oncologists endorse the belief that psychological variables affect cancer."
Satin and her co-authors noted that other researchers earlier linked heart disease, depression and higher risk of death.
"Depressed patients with coronary heart disease have a two-times greater risk of mortality than nondepressed patients after adjusting for clinical factors," they noted, citing another study.
The journal Cancer is the peer-reviewed science journal of the American Cancer Society.