Susan Boyle admits she was hit, bullied at school 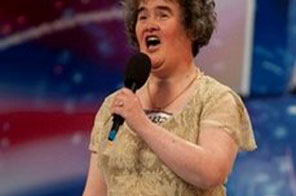 ITV-issued photo shows shows Scottish charity worker Susan Boyle on Britain's Got Talent TV show. The singing star has revealed how she was hit as a child at school by teachers as well as being bullied by other students Source: AFP

LONDON: Scottish singing star Susan Boyle on Tuesday revealed how she was hit as a child at school by teachers.

Boyle, whose frumpy appearance hid a soaring voice which has made her a global star, said she was also bullied by other children.

"You?re looking at someone who would get the belt every day. ?Will you shut up, Susan!? - whack!" Boyle said in interviews published in several tabloids.

"I was often left behind at school because of one thing or another. I was a slow learner," Boyle said in The Mirror, ahead of the release of her album next week.

"I?m just I?m a wee bit slower at picking things up than other people. So you get left behind in a system that just wants to rush on, you know?

"That was what I felt was happening to me."

She added: "There was discipline for the sake of discipline back then. But it?s all very different now. I think teachers are taught to understand children with learning disabilities a lot better."

She admitted one of the worst times of her life was when she started to get bullied at school. "There?s nothing worse than another person having power over you by bullying you and you not knowing how to get rid of that thing."

Boyle, a spinster from a small town in Scotland who was starved of oxygen at birth and has mild learning difficulties, had a meteoric rise to fame earlier this year.

The church volunteer became a star around the world after footage of her singing Les Miserables hit "I Dreamed A Dream" on the auditions for "Britain's Got Talent" became a YouTube hit, with at least 100 million viewings.

Boyle was rushed to a London health clinic suffering from exhaustion after she was defeated in the final of the television talent show in June.

#Susan Boyle admits she was hit #bullied at school
Stay in touch!