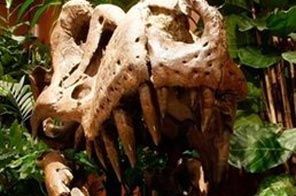 Skull of a 66-million-year-old Tyrannosaurus rex skeleton dubbed "Samson" is displayed at the Venetian Resort Hotel Casino, on September 30, in Las Vegas, Nevada. Samson failed to sell at a Las Vegas auction on Saturday after the top bid of .6 mln fell way below the minimum price. Source: AFP

LAS VEGAS: A 66-million-old Tyrannosaurus Rex named Samson failed to sell at a Las Vegas auction after the top bid of 3.6 million dollars fell way below the minimum price.
Samson, a female T-Rex found on a South Dakota ranch in 1992, also trailed the record 8.36 million dollars that Sue, another T-Rex, sold for at a 1997 auction.
Sue, the most complete T-Rex ever found, has since become a blockbuster attraction in Chicago?s Field Museum, which bought her.
But Samson, which is a little less well preserved, was one of 17 dinosaur and fossil items which failed to sell Saturday, in a sign of the depressed economy.
Officials from auction house Bonhams & Butterfields attempted to put a positive face on the sale that netted more than 1.7 million dollars on 25 other dinosaur and fossil lots.
"I'm disappointed that we couldn't find a buyer, but we will, and I'm pretty happy with the results overall," Bonhams & Butterfields chief operating officer Patrick Meade said.
A pair of a less-known species of dinosaurs related to the triceratops, sold for 440,000 dollars -- below the 500,000 estimate noted in the prospectus but, according to Bonhams & Butterfields, a world auction record for such an item.
They were bought by Larry Lawson of Big Lake, Alaska, who spent about one million dollars in all. The 44-year-old oncologist said the items will adorn his home and offices and be available for schools to visit.
"I've been into this kind of stuff since I was a little boy," said Lawson, who was attending his first auction. "I just came to see who was going to buy the T-Rex and to see if I could get anything other than that. Then a lot of the prices just didn?t get too bad."
Some items did top their estimates, including several of those bought by Las Vegas Sands Inc. chief executive officer Sheldon Adelson and his wife Miriam Adelson.
They spent 5,185 dollars on an ancient cave bear skull found in Romania that was expected to only net 4,000 dollars. They also paid 67,100 dollars for a colorful squid-like ammonite specimen found in southern Alberta, Canada, that was expected to fetch at most 45,000 dollars.
The Adelsons, whose Venetian Resort-Casino hosted the auction and displayed the items as a tourist attraction for five weeks, spent more than 142,000 dollars at the auction.
The couple said they plan to display some of their purchases at the private high school they fund in Las Vegas as well as in their home.
A 17-foot-long Kansas king fish, the second-largest bony fish fossil ever found, sold for 422,000 dollars, exceeding the prospectus estimate of 250,000 dollars