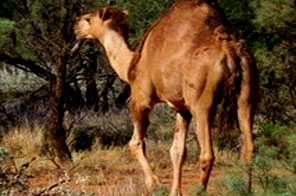 A feral camel searches for food near Alice Springs in Australia. Some 6,000 feral camels are running wild in a remote Australian outback community in search of water, smashing infrastructure and invading the airstrip. Source: AFP/File/Torsten Blackwood

SYDNEY: Some 6,000 feral camels are running wild in a remote Australian outback community in search of water, smashing infrastructure and invading the airstrip, officials said on Wednesday.
As long-running drought grips parts of the country, residents of at least one central Australian town are scared to leave their homes because of the rampaging dromedaries, the Northern Territory government said.
"The community of Docker River is under siege by 6,000 marauding, wild camels," Local Government Minister Rob Knight said.
In recent weeks, the thirsty animals have invaded the township seeking water, taking over the airstrip and destroying facilities in their way.
"This is a significant community -- some 350 people -- where they've actually come right into the community, smashing infrastructure, so it's become a critical situation," Knight said.
"There are health issues, there's camels being trampled and dead carcasses in the community.
"They are smashing over water mains and intruding on the airstrip causing problems with medical evacuations."
More than a million feral camels -- the largest wild herd on earth -- roam central Australia, damaging fragile desert ecosystems and water sources.
The camels, along with donkeys and horses, are also destroying re-vegetation projects in the desert communities by ripping up plants.
The local council has been given extra money to cull the animals but Macdonnell Shire chief executive Graham Taylor said urgent action was needed.
"We are concerned really about the issue of children running around and wanting to play with the camels," he told the Australian Broadcasting Corporation.
"There will also probably be the social and psychological impact on some people about being contained in homes and not being able to step out."
Taylor said helicopters would be used to herd the animals outside town where they would be shot.
Camels were introduced into Australia as pack animals for the vast outback in the late 19th and early 20th centuries, but were released into the wild as rail and road travel became more widespread.
With few natural predators and vast sparsely-populated areas in which to roam, the feral animal population has soared, putting pressure on native species by reducing food sources, destroying habitat and spreading disease.