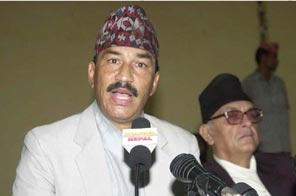 KATHMANDU: Chairman of Rastriya Prajatantra Party-Nepal, Kamal Thapa, on Tuesday said that he sees severe threat to the ongoing peace process as the political parties were busy in power games rather than concentrate in the mandate assigned by the citizens.

Speaking at an interaction programme organised by the Reporters' Club in the capital, Thapa claimed that writing the new constitution in the prescribed time was almost impossible. "There are two armies in the country at present, whoever wins will rule the state," Thapa added. He said that he was in favour of endorsing the budget through the parliament.

When asked if he sees any sign that the monarchy would be revived in the country, Thapa said politics comprises of probabilities and therefore the fact cannot be ignored. He opined that there was a need of the people's referendum to deal with monarchy, Hindu state and federalism.

The parties were united for a short time for the sake of power, Thapa said but in reality they want to destroy the existence of the others and rule the country.