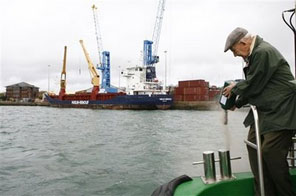 Bruno Nordmanis, 87, the longtime companion of Millvina Dean, the last survivor of the Titanic disaster, scatters her ashes at the terminal where the ill-fated ship set sail at Southampton Docks, England Saturday Oct. 24, 2009. Elizabeth Gladys Dean, known as Millvina, who was nine-weeks-old when the liner sank after hitting an iceberg, died on May 31, 2009 aged 97. Source: AFP

NORFOLK: The company that has exclusive rights to salvage the Titanic is planning a possible expedition to the world's most famous shipwreck in 2010.
The first expedition to the North Atlantic wreck site since 2004 is revealed in a filing by RMS Titanic Inc. in U.S. District Court, where four days of hearings are scheduled to begin Monday on the company's claim for a salvage award.
Lawyers for RMS Titanic Inc. confirmed the expedition plans but declined to discuss them in detail.
"That is something that is being looked at right now but it's not in any way a done deal," attorney Robert W. McFarland said in an interview. He said the company would have more to say at this week's hearing.
U.S. District Judge Rebecca Beach Smith, a maritime jurist who considers the wreck an "international treasure," will preside over the hearings. They are intended to determine a salvage award and establish legal guarantees that thousands of Titanic artifacts remain intact as a collection and forever accessible to the public. Some pieces have ended up in London auction houses.
The 5,900 pieces of china, ship fittings and personal belongings are valued in excess of $110 million and are displayed around the world by Premier Exhibitions Inc., an Atlanta company. RMS Titanic is a subsidiary of Premier.
The Titanic sank on its maiden voyage in international waters on April 15, 1912, and has been subject to competing legal claims since an international team led by oceanographer Robert Ballard found it in 1985. Since then, RMS Titanic has retrieved artifacts during six dives.
Courts have declared it salvor-in-possession meaning it has exclusive rights to salvage the Titanic but have explicitly stated it does not own the 5,900 artifacts or the wreck itself.
At the hearings this week in Norfolk, lawyers for RMS Titanic will essentially seek title to the artifacts and a monetary award for its salvage costs. More than a dozen experts will be called to support the company's claim, according to a court filing.
In seeking a salvage award, RMS Titanic will have to document the labor it devoted to its previous expeditions, the risks incurred during the 2 1/2-mile trips beneath the Atlantic to the Titanic wreck site, and the preservation efforts and archaeological value of the wreck and its contents, among other factors.
Smith, the judge, has drawn upon the government to help craft covenants to keep the artifacts preserved, intact as a collection and available to the public. She is mindful of the Titanic's place in history and the 1,522 people who died when it went down after it struck ice nearly a century ago, based on her previous statements from the bench.
"I am concerned that the Titanic is not only a national treasure, but in its own way an international treasure, and it needs protection and it needs to be monitored," the judge told lawyers in the case nearly one year ago.
If the court agrees to RMS Titanic's request, the company could sell the entire collection to a museum with court approval. The company has said it has no plans to do so.
The judge will also consider a competing claim.
Douglas Faulkner Woolley, a British citizen, challenges RMS Titanic's legal claim to the wreck site and plans his own salvage operation.
Lawyers for RMS Titanic declined to discuss the competing challenge.
International protections have been sought for the Titanic almost since the wreck was discovered.