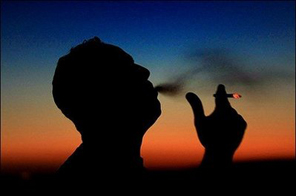 A man smoking. Middle-aged male smokers with high cholesterol and blood pressure die, on average, a decade sooner than peers without any of these heart disease risk factors, according to a new study. Source: AFP

PARIS: Middle-aged male smokers with high cholesterol and blood pressure die, on average, a decade sooner than peers without any of these heart disease risk factors, according to a study published Friday.
Many studies have shown that not smoking, eating healthily and exercising cut heart disease rates.
But few have tackled the problem from the other end: to what extend is life expectancy shortened by having these heart disease risk factors?
To find out, researchers led by Robert Clark from the University of Oxford sifted through data from 19,000 male British civil servants who were examined in the late 1960s when they were 40 to 69 years old.
Participants provided detailed information about their medical history, lifestyle and smoking habits, and doctors recorded their weight, blood pressure, lung function, cholesterol and blood sugar levels.
More than 7,000 of the surviving participants were re-evaluated in 1997, 28 years after the initial examination.
The study, published in the British Medical Journal (BMJ), found that the men who faced a triple risk threat at the outset were two-to-three times more likely to have died of a heart-related problem that men free of all three risk factors.
On average, their lives were shortened by a decade, the study found.
The percentage of people who have fatal strokes or heart attacks has declined by about a quarter in many rich countries over the last decade.
But the prevalence of known risk factors has not dropped as quickly.
In the United States, for example, uncontrolled hypertension has fallen since 1999 by only 16 percent, high blood cholesterol by 19 percent, and tobacco use by just over 15 percent, says the American Heart Association.
Other sources of risk have remained constant or even increased: people exercise no more than 10 years ago, while rates of obesity have climbed sharply, especially among children.