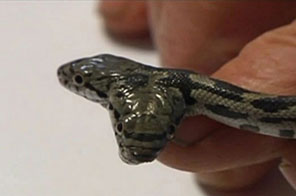 ILLINOIS: A two-headed snake has been discovered in a drawer full of rubbish in Illinois.
When Jerry Williamson's wife first told him she had found the scary reptile he thought she was pulling his leg.
But to his surprise she was telling the truth.
Unfazed by the terrifying stigma attached to the two-headed Hydra of Greek mythology the couple decided to keep the reptile.
They were worried it would not be able to survive on its own.
They say it is a North American water snake and has just shed its skin.
The 'Nerodia sipedon', as it is also known, is a large non-venemous snake active during day and night.