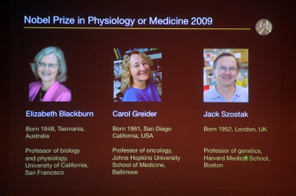 A picture taken from a screen as the Nobel Assembly at Karolinska Institute announces Elisabeth H. Blackburn, Carol W. Greider and Jack W. Szostak as the winners of the 2009 Nobel Prize in Medecine on October 5, 2009 in Stockholm for discovering an enzyme which helps chromosomes in cells stay eternally young, the Nobel jury said. They were honoured for the discovery of "how chromosomes are protected by telemores and the enzyme telomerase," the jury said. Source: AFP

STOCKHOLM: Americans Elizabeth Blackburn, Carol Greider and Jack Szostak were named winners of the 2009 Nobel Prize in medicine on Monday for research that has implications for cancer and aging research.
The trio solved a big problem in biology: how chromosomes can be "copied in a complete way during cell divisions and how they are protected against degradation," the citation said.
It said the laureates have shown that the solution is to be found in the ends of the chromosomes — the telomeres — and in an enzyme that forms them. Telomeres are often compared to the plastic tips at the end of shoe laces that keep those laces from unraveling.
"The discoveries by Blackburn, Greider and Szostak have added a new dimension to our understanding of the cell, shed light on disease mechanisms, and stimulated the development of potential new therapies," the prize committee said in its citation.
Blackburn, who holds U.S. and Australian citizenship, is a professor of biology and physiology at the University of California, San Francisco.
Greider is a professor in the department of molecular biology and genetics at Johns Hopkins University School of Medicine in Baltimore.
London-born Szostak has been at Harvard Medical School since 1979 and is currently professor of genetics at Massachusetts General Hospital in Boston. He is also affiliated with the Howard Hughes Medical Institute, the citation said.
The award, announced Monday, includes a 10 million kronor ($1.4 million) purse, a diploma and an invitation to the prize ceremonies in Stockholm on Dec. 10.
The Nobel Prizes in physics, chemistry, literature and the Nobel Peace Prize will be announced later this week, while the economics award will be presented on Oct. 12.
Prize founder Alfred Nobel, a Swedish industrialist who invented dynamite, left few instructions on how to select winners, but medicine winners are typically awarded for a specific breakthrough rather than a body of research.
Nobel established the prizes in his will in 1895. The first awards were handed out six years later.