Vegas dressed to the nines as stars align 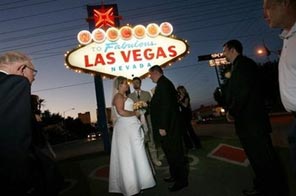 A couple is pictured getting married under the famous 'Welcome to Fabulous Las Vegas sign' surrounded by family and friends. Source: AFP

Either way, this recession-hit gambling haven known for its prolific wedding industry enjoyed an unusual midweek bump Wednesday thanks to a numerical alignment on the calendar of the ninth day of the ninth month of 2009.

Las Vegas exploited the date with a promotional campaign which included the flamboyant mayor, Oscar Goodman, renewing his vows flanked by showgirls and Elvis and Rat Pack impersonators.

"Anytime there's a numerical thing like that, it brings people in," said Joni Moss, president of the Nevada Wedding Association, who arranged the mayor's event.

Nearly 300 couples filed for marriage licenses on Wednesday in Clark County, which contains Las Vegas, and 637 pairs who did so on Tuesday in anticipation of the day, both impressive totals for non-weekend, non-holiday business, said Cheryl Vernon, the county's marriage services coordinator.

"These special dates become like Valentine's Day," said Vernon, referencing the February holiday that is guaranteed to bring a bridal rush. "It always helps us."

The number nine is seen as auspicious for Chinese because of its association with emperors and the dragon. Nine also sounds like "forever" in spoken Chinese.

Theodore and Mari Hendricks of Vancouver, Canada, didn't know that when they decided last week they wanted to marry on Wednesday.

"I just thought the date seemed cool," the groom said. "You know, it's something to tell people."

At the Viva Las Vegas Wedding Chapel, more than 65 couples exchanged vows, a dramatic surge from the four or five typical of a normal Wednesday.

The chapel offered a 199-dollar special in which couples could partake in a group ceremony at 9:00 pm and 9:30 pm -- officiated, naturally, by an Elvis impersonator.

The chapel manager, Brian Mills, suggested that another reason for the surge on 9-9-09 could be that the unpopularity of the coming weekend, which includes the anniversary of the September 11, 2001 terrorist attacks on the United States. Bookings for September 11, a Friday, and September 12, Saturday, are down sharply from the typical weekend figures, he said.

The 99 Cents Only Stores chain picked up the tab for the nine couples. It also offered a payment of 999 dollars and 99 cents to any newborn baby who weighs in at nine pounds nine ounces on Wednesday.

#Vegas dressed to the nines as stars align
Stay in touch!