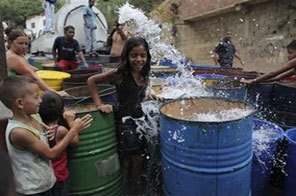 FILAS DE MARICHESL: While a drought has put Caracas under widespread water rationing for the first time in years, for Venezuelans in this hillside slum it's just more of the same.
Every two weeks, Naisi Obando and her children join the crowd at the water truck when it rumbles up a dusty road into their shantytown. They bring barrels to be filled with a gushing stream from the truck, and use garden hoses to siphon the water from the barrels down steep stairs to their home.
"We really suffer a lot to get water here," Obando said.
Like many Latin American cities, poor sections around Venezuela's capital lack regular access to water because of unchecked sprawl and inadequate investment in infrastructure.
The situation has been made worse by a drought blamed on an El Nino weather phenomenon, which has left reservoirs at extremely low levels and this week prompted authorities to begin water rationing throughout Caracas.
The El Nino over the Pacific Ocean has been blamed for drier weather this year in parts of South America. In Bolivia, for instance, the United Nations said Friday it will provide food and water aid to families suffering from drought.
Ecuador has begun rolling blackouts to ration electricity because of low water levels in its hydroelectric dams. Water scarcity could also increase the already frequent power outages in Venezuela, where hydroelectric dams produce most of its electricity.
Some other Latin American countries are also facing unusually dry conditions.
There has been seasonal flooding in northern Argentina, but drought in central Argentina is causing water shortages. Mexico City has been cutting back water supplies to much of the city for several months as key reservoirs fall to dangerously low levels. People in many neighborhoods are left without water for several days a week.
President Hugo Chavez has appealed to Venezuelans to take shorter showers and use less energy. His opponents blame Chavez for a lack of planning, saying his government has failed to invest enough in electricity and water projects.
Taps have been dry for months or years in parts of Filas de Mariches, where homes of brick and corrugated metal are stacked on the steep hillsides. Atop most of the homes are blue plastic cisterns that people use to collect water whenever they can get it.
Residents have long been pressing government officials to run new water pipes to their homes. Chavez's government built a water treatment plant nearby and paved some roads that used to be dirt — but remains far from bringing water to everyone.
The municipal government, controlled by an anti-Chavez mayor after years under pro-Chavez rule, also has promised to lay pipes to replace the unreliable improvised hookups that have largely gone dry. How soon that might happen is unclear.
In the meantime, trucks bring free water every two weeks courtesy of the mayor's office. Those who miss the handout must buy water from trucks for the equivalent of about $4 a barrel.
"We're always fighting for the pipe," said Doris Marcano, a single mother who poured buckets full into a barrel as the hose splashed laughing children.
Once the truck rolled away, rain drops began to pelt the water in the barrels.
"Let's hope it rains a lot so the wells fill up," Marcano said.