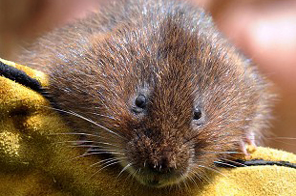 From eating crops to threatening native wildlife, a series of "invasive" mammals introduced to the UK over the centuries are damaging our countryside, a report has said.
Some are well-known "villains", such as the American mink or muntjac deer, while others including rabbits and rats have been here so long that we think of them as natural.
Two of our fastest declining native species, the red squirrel and the water vole, are both threatened by mammals which were introduced by humans in the past two centuries.
The American mink, released from fur farms since the 1920s, eats water voles, which have seen numbers decline by 90% in recent years.
And the grey squirrel, which was brought to this country from the US in the 19th century, out-competes its smaller red cousin for food and habitat and carries the squirrelpox virus which is fatal to our native species.
Such is the impact of the grey squirrel, which also damages trees and forestry plantations, that it features on the global list of the "worst 100" invasive species around the world.
Joining the grey squirrel amongst the top 100 invasive species globally are rabbits and house mice, both of which are non-native species and were introduced to the UK around 1,000 years ago.
Rabbits, which have been introduced more recently to places such as Australia with devastating effects, are a major agricultural pest in the UK, as well as carrying disease.
Other mammals which can cause problems in the countryside range from muntjac deer to the red-necked wallaby, which could do potential damage to capercaillie on Loch Lomond island, the study from the Peoples' Trust for Endangered Species said.
Impacts include predating on native species, competing for food and habitat, carrying diseases which can affect wildlife, livestock and humans, breeding with species to produce "hybrids" - as in the case of red and sika deer - or altering the landscape and damaging crops or woodlands.