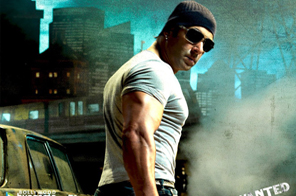 MUMBAI: ‘Wanted’ is an action flick, which marks the directorial debut of Prabhu Deva, the dancing wizard from South, who has also dabbled in acting. The star ensemble of the movie includes Salman Khan, Ayesha Takia, Om Puri, Mahesh Manjrekar, Sayaji Shinde, Prakash Raj, Aseem Merchant, Vinod Khanna. Sajid-wajid duo has composed the musical score, while Arun Bhaivar has penned down its lyrics. The producers of the Hindi film ‘Wanted’ are Sahara One Motion Pictures and S. K. Films Enterprises.

Radhe (Salman Khan) is a sharpshooter, who works for Gani Bhai, the hardcore Mumbai Mafioso. A bit of a maverick, he likes to work on his own terms. The fearless Radhe eliminates all the enemies of Gani Bhai, quashing all the opposition single-handedly. In the process of this cleansing, Radhe makes more enemies than Gani Bhai himself. Meanwhile, the young and pretty Jhanvi (Ayesha Takia) falls for Radhe, much to his astonishment. Soon, bloody gang wars ensue in Mumbai, with each gang bent on outrunning the other, be it the Golden Gang or Data Pawle's Gang, with the aim of wresting control of the city.

The Police Commissioner of the crime-torn city vows to undertake a crusade to clean it of this colossal network of criminals and arrests 200 criminals in a day, as a starter. A gory mayhem follows, as the criminal gangs are after each other and the police after the gangs. The twist in the tale arrives when Radhe is, as expected, dragged into this and becomes the 'most wanted' man in Mumbai. Everyone, right from the gangsters to the police, is vying for his life, as he is the man who knows too much.

Radhe is a source of valuable information for the police; criminals are alarmed that he may reveal their dark secrets. Who will find Radhe first? Slated for a September 18 release, 'Wanted' is riding solely on Salman's shoulders and an exploding plot. The man in question has charmed the audience to the theaters for years now, but as the plot is rightly said to be the soul of a film, the Salman Magic could be tested. With the release date not being far away now, we will soon see whether the magic works or not!