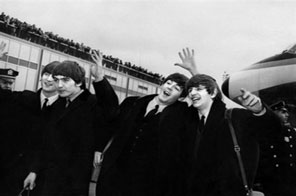 SAN FRANCISCO: A judge ordered a California online music service to stop delivering Beatles songs to users, according to a copy of the ruling posted online.
US District Court Judge John Walter in Los Angeles sided with British music giant EMI, which filed suit this week accusing Bluebeat.com and its parent company Media Rights Technologies of infringing on its rights to Beatles songs.
Walter brushed aside Bluebeat's contention that it wasn't violating copyright laws because Beatles tunes at its website were re-recorded "audio visual performances with related sounds."
Bluebeat did not submit any reliable evidence to support its claim that it "independently developed their own original sounds," the judge said in his ruling.
Walter issued a restraining order barring Bluebeat from streaming or selling Beatles digital downloads of Beatles music and said he believed EMI was likely to win its legal case against the Internet firm.
EMI owns the rights to Beatles recordings and collaborates with Apple Corps on distribution of the music.
EMI said that Bluebeat, which offers MP3 downloads of songs for 25 cents each, is not authorized sell Beatles tunes.
Apple Corps was the Beatles recording label and is controlled by surviving members of the legendary 1960s era band and spouses of the late John Lennon and George Harrison.
Apple Corps has been notoriously leery of making Beatles music available for digital download, eschewing even allowing songs to be delivered to iPod or iPhone devices through the globally popular iTunes online store.
Beatles music made a tentative step in September toward a digital future with the release of "The Beatles: Rock Band" videogame devoted to the group's music and performances.
Another step was taken Wednesday with the announcement that EMI and Apple Corps will make a re-mastered catalogue of Beatles music available digitally on limited edition USB drives in early December.
The apple-shaped USB drives with 16 gigabytes of memory each will contain 14 stereo titles as well as music video, photos, album art, and 13 mini-documentary films about studio albums.
They are priced at 280 dollars (US) and can be pre-ordered online at the official beatles.com website.