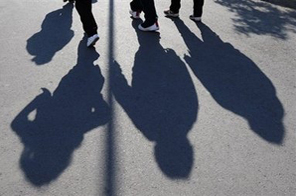 Shadows of patients at a weight reduction clinic. Source: AFP

PARIS: Weight-loss surgery that curbs food intake by stitching up parts of the stomach or small intestine reduces the risk of cancer in obese women by more than 40 percent, according to a study released Thursday.
But so-called bariatric surgery, which does not include fat removal through liposuction, did not appear to have the same cancer-beating impact on men, said the study in the The Lancet Oncology, a leading British medical journal.
Recent research has shown obesity to be the second most preventable cause of cancer after smoking. In the US, 14 percent of cancer deaths in men and 20 percent in women are attributed to being overweight or obese.
Until now, however, it was not known whether surgical treatment to reduce obesity lowered incidence of the disease.
A team of researchers in Sweden led by Lars Sjostrom of Gothenberg University anaylsed data from an ongoing health survey to compare cancer rates in obese patients who had weight-loss surgery, and those who did not.
Starting in 1987, they tracked 2,010 obese men and women who underwent bariatric procedures, and 2,037 obese patients who received other forms of conventional treatment. Subjects were tracked over a period averaging nearly 11 years.
The group who went under the knife lost, on average, nearly 20 kilos (44 pounds) over 10 years, while the control group put on an extra 1.3 kilos (2.9 pounds).
The number of first time cancers in the surgery group was 117, compared to 169 in the non-surgery group. But the benefits only showed up in women, who showed a 42 percent reduction in the onset of new cancers.
The researchers say the disparity may reflect a statistical distortion due to the far smaller number of men in the study.
A more likely explanation, however, could be the impact of treatment on post-menopausal breast and uterine cancers, noted Andrew Renehan of the University of Manchester in a commentary, also in The Lancet Oncology.
Surprisingly, there was no direct relationship between the amount of weight loss and reduction in cancers, suggesting that the anti-cancer benefits may be due to some mechanism other than shedding kilos or reduced calorie intake.
More research is needed to find out it this is true, the researchers said.