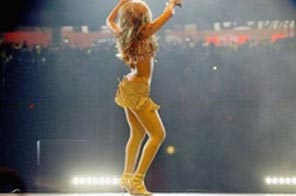 US singer Beyonce Knowles, seen here in Houston, Texas in 2004, once wrote a song celebrating her famous curves while still with Destiny's Child. Source: AFP

LONDON: Having a well-covered behind, big hips and solid thighs "is good for you", experts said on Tuesday in a new finding likely to delight women the world over.
Carrying fat on the hips, thighs and bum, rather than around the waist, has a range of health benefits and actively protects against diabetes and heart disease, researchers at Oxford University said.

"Fat around the hips and thighs is good for you but around the tummy is bad," said Dr Konstantinos Manolopoulos, one of three scientists behind the research which has been published in the International Journal of Obesity.

A big bottom is much better than carrying fat around the waist, which tends to release more harmful fatty acids into the body, the research shows.

But fat carried on the thighs traps these harmful fatty acids and stops them from latching on to the liver and muscles and causing range of health problems, including insulin resistance.

Although fat around the thighs and backside tends to burn slower and be harder to shift, it can release beneficial hormones which protect the arteries and help blood sugar control, the research showed.

"The idea that body fat distribution is important to health has been known for some time," said Manolopoulos, who is a researcher at the Oxford Centre for Diabetes, Endocrinology and Metabolism (OCDEM).

"However is it only very recently that thigh fat and a larger hip circumference have been shown to promote health, that lower body fat is protective by itself."

It is shape that matters - and as far as health is concerned, being 'pear-shaped' is much preferable to being 'apple-shaped'.

In an ideal world, the more fat around the thighs the better - as long as the tummy stays slim, Manolopoulos said.

"Unfortunately, you tend not to get one without the other," he said.