Winemakers to slug it out in biggest wine fair 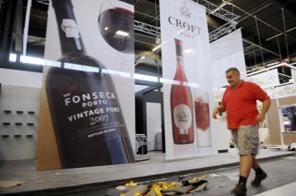 A worker walks in front of posters during preparation for the international wine fair Vinexpo in Bordeaux, southwestern France, on June 18, 2009. Vinexpo, the world's biggest wine and spirits fair which start on June 21 is a worldwide benchmark event that brings together all players in the wine and spirits industry. Source: AFP

BORDEAUX: Vinexpo, the world's biggest wine and spirits fair, opens Sunday as 40,000 professionals from around the globe gather to ply their beverages in markets made fiercely competitive by the economic crisis. Wine sales have floundered since the crisis hit. In addition, even before the economic woes, traditional markets France, Switzerland, Portugal, Austria, Argentina and Spain were consuming less and less wine.
That trend has producers focusing on newer and emerging markets. To the relief of producers, a study conducted for Vinexpo by the International Wine and Spirit Record (IWSR) predicts that 108 other countries will increase their thirst for wine.
Overall world wine consumption is predicted to grow by six percent over the next five years, and the challenge is to capture those new consumers. Vinexpo brings the trade together, and despite tightened travel and marketing budgets, local hotels are full and 48 countries, up from 45 in 2007, have joined the exhibition. "We start this edition with great serenity," said Xavier de Eizaguirre, president of Vinexpo and general director of Baron Philippe Rothschild SA. "It's in line with the previous edition with 2,400 exhibitors and all of the space rented." As usual the world's largest producers, Italy, France and Spain, dominate the exhibition hall, but smaller producers like Mexico, Portugal and South Africa have increased their presence this year.
Five countries will be at Vinexpo for the first time, including Sweden, Belarus, Mauritius, Egypt and Brazil. Along with other Latin American producers, Brazil has ramped up both production and promotion of its wines.
The country's vineyard area increased by 96 percent between 2002 and 2008, making Brazil now the third biggest producer in South America, followed by Uruguay, Peru and Bolivia, according to recent statistics from the International Organisation of Vine and Wine (OIV). Argentina and Chile, Latin America's leading producers, have also turned out for the show. Argentina has 49 exhibiters and Chile 40, a slight increase from Vinexpo in 2007. They bring good news with them: despite the global recession both have seen a recent bounce in exports. Napa Valley producers are also out in force this year at Vinexpo with 17 vintners and more than 70 wines. The Californians have a new objective -- to use Vinexpo to reach the French market as well as Hong Kong, Shanghai and South Korea. Nevertheless, three notable heavyweights will not have stands this year -- E & J Gallo Winery, Constellation Brands, the world's largest wine producer, and Taittinger. "At Constellation Europe we continually review the shows and events we attend. In 2009, after significant presence at Prowein and the London Wine Trade Fair, we felt it would not be necessary to take a stand at Vinexpo," wrote James Lousada, SVP Sales and Marketing, Constellation Europe, in an email to AFP. Constellation's head office said the "current global economic condition" also played a role in their decision. The economy indirectly led to E & J Gallo Winery's decision to forgo a stand at Vinexpo. Citing the "economic situation and latest evolutions in the French market," Gallo has announced a new distribution partner for France, namely Bordeaux wine merchant Yvon Mau.
Gallo, the world's largest family-held wine producer, currently sells over a million bottles of wine in France, a drop in the barrel for the wine giant. It hopes a well-entrenched native partner like Yvon Mau will help reposition their wines in this traditional market, which is notoriously difficult for imported brands.
The biggest consumers of imported wine are Britain, Germany, the United States and Russia. Britain has become the top buyer for German and US wine.
The United States, the fourth largest producer, is currently the third largest market for wine, and the target of many attending Vinexpo. Americans spend nearly 22 billion dollars on wine.
The International Wine and Spirit Record predicts the United States will be the number one wine-drinking country in the world by 2012, with sales on imported wine reaching 10 billion dollars. China and Russia are also the focus of intense interest at Vinexpo.
The study reckons the Chinese will drink one billion bottles of wine in 2009.
In Russia, consumption is predicted to grow 12 percent annually, sparking the French producer Castel to announce its ambition to double exports to Russia within five years, envisioning revenues of 45.6 million euros. In addition to bringing together producers and buyers, Vinexpo will host conferences on topics such as strategies for surviving the global crisis, bio-dynamic viticulture and sustainable development.
The trade show will run until Thursday.

#Winemakers to slug it out in biggest wine fair
Stay in touch!