The government has been promising fast growth and development every now and then, but the dilemma is that the impact of the initiated economic development and social changes has not brought a difference in the citizen’s daily life 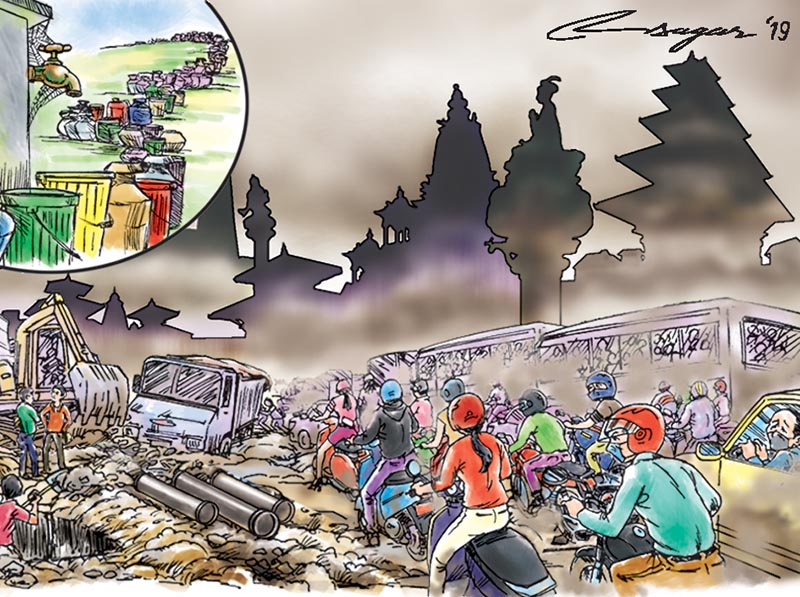 Illustration: Ratna Sagar Shrestha/THT
Generally, a nation’s development is perceived by its economic achievements, political stability and security along with the socio-economic happiness of its citizens. Economic attainment includes developments in transportation, telecommunication, electricity and irrigation that provide civilians with basic needs. But, more importantly, augmentation deals with people’s contentment and happiness, which is connected with social development. Principally social development submits to education, sanitation, medical care and righteous livelihood needed for a dignified life. There are some potential sectors that can push Nepal’s development.  Human resource mobilisation, building the infrastructure for economic growth and promotion of tourism can be envisaged at first sight. But the government and concerned ministries do not have a clear and specific vision regarding these key sectors, although jingles are always there but without result-oriented actions. Public health, education, skills and human resource development are a major component in determining the productivity of any economy. Though human resource, health and education are the foundations of development, but still they have not been addressed effectively. Dr KC ’s submission for implementing the Mathema Commission’s recommendations for reforms in medical education was not addressed adequately. Along with the chaos and shortages regarding the basic needs of the people, the government is not in a position to provide even sufficient drinking water. Hence, the completion of the much-hyped Melamchi project has been pushed back after the Italian contractors left the scene. Although the government has forwarded different schemes on health, education and employment generation, yet it has not succeeded in meeting the target due to lack of vision and performance. A democratic or elected government thrives only if it can provide easy access to services and facilities to its people. But most of the initiatives have proved futile in addressing the people’s concerns. Transparency International has seen Nepal as one of the most corrupt countries. It is difficult to get any public utility service without a bribe. Though there has been much talk about railways and waterways for connectivity within and outside the country, the harsh reality is that we have only highway connections and some expensive air-links to different parts of the country. And the available highways are not well maintained, causing road accidents and fatalities every now and then. The current status of infrastructure does not bode well for the growth of trade and transit, the foundation of development. Although the government has called for investments from the developed countries, and is preparing for a major investment summit in March, it is not easy to draw investment in the current situation. Consequently, the key development partners have articulated their concerns over the country’s poor investment scenario, bureaucratic hassles and lack of policy reforms that hamper trade or business.   Previously, Nepal had held an investment summit in 2017, but it failed to generate the desired output. Nepal requires a solid trade structure and quality infrastructure to draw the attention of investors. Given the immense potential of tourism, the government has promoted the ambitious Visit Nepal 2020, which aims to increase tourists’ arrival to Nepal by 2020 to 2 million. In preparation for the Visit Nepal 2020, the government has to build the necessary infrastructure and services to facilitate 2 million tourists.   Although the development of infrastructure and services appear very little, yet the VNY 2020 has taken centre stage. The focus is on publicity while ignoring the relevant actions. In fact, only a clear vision and adoption of an effective attitude can pave the way for economic and social development. But in our case, vision with concrete thoughts and solid methodology to approach the goals is lacking.  Simply planning and discourses at national or international forums without earnest efforts and sincerity will not deliver the result-oriented output. The government has been promising fast growth and development every now and then, but the dilemma is that the impact of the initiated economic development and social changes has not brought a difference in the citizen’s daily life. In fact, development in a democracy should promote the wellbeing of citizens, leading to people’s contentment and participation. Only when there is people’s participation in the development process will the gap in poverty narrow down and prosperity will be rationed to everyone. Definitely, the government’s version about Nepal’s growing economy sounds good, but it is backed by the big question “how”. Though we can ignore the proof of it at present, we want to experience it before social happiness gets distressed. There must be a commitment to good governance, adequate delivery system, responsible investment, corporate activities with growth, transformation from the transition to a sustainable one. It is getting late for the government to realise that simply exposure cannot meet the targeted aspiration for development. People’s needs and priority should be valued. Shah was former Head of Central Department of Economics, TU
#economic growth #economic development #social development #Development dreams #economic achievements
You May Also like: