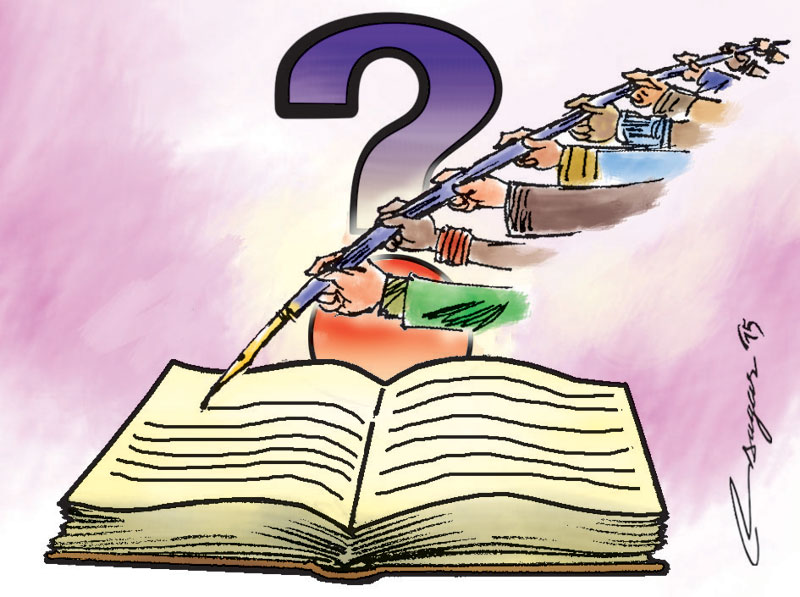 A recent book, Why Nations Fail written by Daron Acemoglou and James A Robinson, is clearly something that our honourable Constituent Members have not read as one reads the draft Constitution.

They obviously believe that, as elected political leaders, they can engineer development and banish poverty from the face of Nepal simply by calling for more and more foreign aid and by calling for sound economic policies (often dictated by donors and multilateral institutions controlled by donors).

Consider the state of our bureaucracy now with its inability to spend no more than 30%, on average, of the budgeted capital expenditure due to its inability to develop development programmes and projects completely mired in red tape and inefficiency, staff underemployment and, not least, inter ministerial conflicts and turf wars.

The other outcome will be drastic compromise on the principle of merit resulting in gross inefficiencies and ineffectiveness of public institutions. Good institutions permit not just the application of the rule of law to all citizens fairly, but foster creativity and innovation without which one cannot achieve sustained development. In short, good institutions are not results of favourable culture, values nor geography but a consequence of conscientious political effort to build sound institutions that allow most citizens to be included in the very process of governance by being able to decide on what is good for them and their families rather than have the political leadership do so. Time is right, now, to correct past mistakes and incorporate in the Constitution how public institutions with the right leadership and systems can strengthen democracy, deliver sustained development and eradicate poverty once in for all.

Public institutions must be empowered to fight vested interests in favour of the public good. It must protect from being highjacked by the economic elites as well as being overwhelmed by political populism. This necessitates that public institutions be independent while the civil service, as an executive arm of government, be autonomous from political encroachment.

Let us recognise that if the Council of Ministers collectively, and the departmental Ministers individually, comprise the ‘political executives’ of government, then, Secretaries and Director Generals are the ‘administrative executives’ who have a duty to live by and protect the rule of law as per their governing acts, while also ensuring that no policy contravenes an existing act, unless duly amended by Parliament.

The draft Constitution provides for 10 Commissions in total by laying down their rationale, functions, duties and powers of the CEOs. They are covered in Parts 20-29 inclusively. Commissions such as the CIAA, PSC, Auditor General and Election Commission, surely, should be endowed with an independent status than say commissions like Natural Resources and Fiscal Commission, Women’s, Dalit’s, Inclusion and Attorney General’s Office (which should be purely an executive office in the Ministry of Law and Justice).

Of vital importance for rapid economic growth is that public institutions should move away from being an ‘administrative civil service’ towards being a ‘managerial civil service’.

This calls for civl service reforms, where bureaucrats change their behaviour and act like managers in the private sector. The leadership in the civil service must act to enrich individuals, communities and businesses to add to the national income and wealth rather than impersonally going by the books, so to speak, with hardly any care for concepts like efficiency, effectiveness and excellence.

Improving service quality at the least cost should be their overriding efficiency concern. Achieving ministerial and departmental goals through wise policy choice and execution should be their primary concern for effectiveness. And providing political parties in power to meet their manifesto’s aims with the right application of the rule of law should be what constitutes their quest for managerial excellence. A managerial civil service is also exemplified by getting rid of hierarchy by flattening the bureaucratic organisations with minimum layers and maximum delegation of authority and responsibility to lower levels. It must learn to treat the people as customers, whose taxes pay for their salaries and perks.

Finally, to usher in the concept of leadership so vital for any managerial civil service, all heads of Commissions, Ministries and Departments must be selected on merit. Based on their professional competence in being able to provide, at the time of selection, a 4 year Strategic Performance Plan on which basis they should be chosen. Upon appointment as CEO, they should sign a MOU negotiated with the body they account to (e.g. Parliamentary Sub Committees or Ministries) for their Annual Performance Outputs and Outcomes for his/her term of office. Of course, they can be modified after each year should the political, economic and social conditions change drastically.

Rana is Professor at SAIM and former Finance Minister