Human rights and corruption: How they affect investment, stability

It hurts us all if corruption is preventing foreign investment and holding back development, which we have been promised for half a century and which still feels a long way off 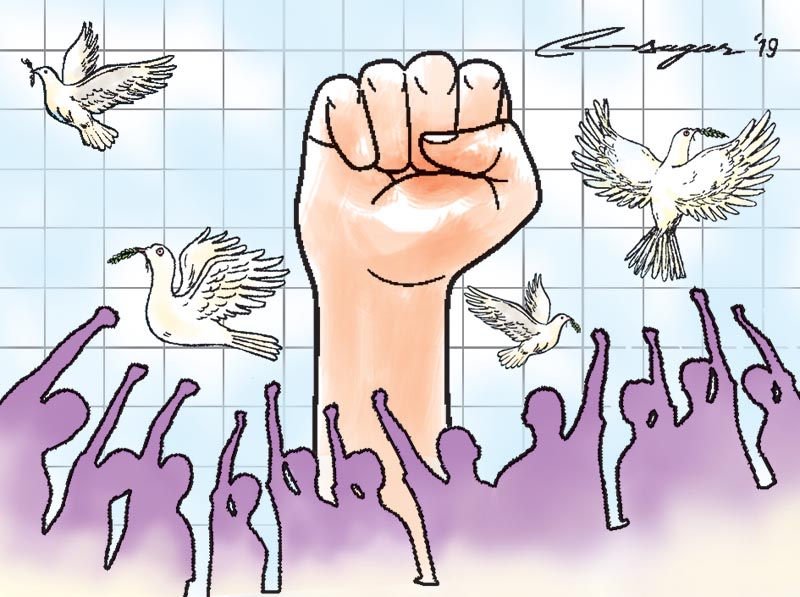 Illustration: Ratna Sagar Shrestha/THT
Regarding the many news reports that “Donors, investors voice concern over lack of reform and corruption ahead of investment summit”, the overall impression is that investors lack confidence to do business here. These worries were emphasised by two influential recent reports.  The World Bank’s 2019 Doing Business report shows Nepal falling five places, and it also fell slightly in the Transparency International’s recent Corruption Perception Index. At first sight, this might not seem like a direct concern from a human rights perspective, but for me there are strong echoes. Corruption and human rights are intimately connected in the real life experiences of people in most parts of the world. Corruption matters in human rights because it is a promising entry point to analyse and understand the acts and events that precede any act of human rights violation. On the one hand, failure to prevent or even reduce corruption indicates that there is some serious problem in the heart of governance. And this has to include the common view that the justice system simply doesn’t work properly. Many human rights personnel and practitioners have for years been saying that the justice system excludes all vulnerable and marginal groups.  But now it seems that our legal system doesn’t even work for foreign companies that want to invest—and whom our government is keen to encourage as plans to follow up on the 2017 international investment forum so soon would suggest. Since long, it seems that the human rights community has for different reasons failed to win over public opinion with its arguments. Even in recent debates, even if people don’t come out openly to say it, there is an impression from many commentators that somehow the people pushing for the truth and justice are really just out for ‘revenge’ or, worse, their own political gain. No one who has ever stopped for a few minutes to hear the story of relatives of someone who disappeared during the conflict could fail to be moved. Whenever I talk to the victims and survivors, it is clear that the first demand is the truth—‘I want to know what happened to my relative all those years ago’ is the common phrase we hear.  They know instinctively that any justice or reparation can only happen in a satisfactory way if there is the truth first. Not just a truth from one side, but a widely accepted truth. Nepal needs an official version and history of what happened during the conflict, a version that all of us can trust and believe.  Otherwise, we will continue to go around with our own stories in our head, each of us with our own version. This will mean mistrust.  We cannot rebuild confidence in the state institutions as long as so many different versions persist. It hurts us all if corruption is preventing foreign investment and holding back development, which we have been promised for half a century and which still feels a long way off.  This is particularly true for those in isolated rural areas or our rapidly expanding towns along the highways, where people look for employment, which is still so rare. The echo I feel between this and human rights, is this: impunity.  It is difficult to describe, but we all know that corruption continues because people don’t think they will be brought to justice.  In the same way, human rights violations and violence against women and children go unpunished as if our state institutions are saying that they are not a priority. My motivation for spending my life for justice for women and an end to widespread human rights violations is seeing the sufferings of the victims and their families and friends.  But over the years, I have come to think that it is hard to imagine political stability in Nepal as long as so many people perceive themselves as excluded, discriminated against and vulnerable to abuse by state officials of different kinds at any time. As Transparency International has often told us, people have to pay bribes to officials to get the government services that are their right. They are also the people who are likely to be shot at or beaten if they decide to protest against these denials of services. Does anyone really think that this a foundation for political stability?  Progress and prosperity are a common demand of all. Everybody, politicians and government workers also, agree that without political stability it is difficult to realise our goals of prosperity. And I am sure from my own experience that political stability is prevented by continuing human rights abuses.  Corruption and human rights deficit mean lack of investment and political and social instability.  It is in the interests of all, not just human rights activists, to deal with this problem. As I have pointed out in various talks and articles in the last few months, yesterday’s impunity is today’s impunity, and probably tomorrow’s. Our justice system will not be fixed until and unless we take a hard look at the impunity of the conflict era.  This is where transitional justice comes in to address the many, many cases that are that are too much for our shaky justice system that still works so slowly even for the issues of ‘normal’, non-conflict times. The prosperity we all want will only come when we end impunity.  And only then will we be able to rebuild the trust of our citizens in the institutions that were set up to serve them. Ansari is commissioner of Nepal Human Rights Commission
#Human rights #corruption #investment
You May Also like: