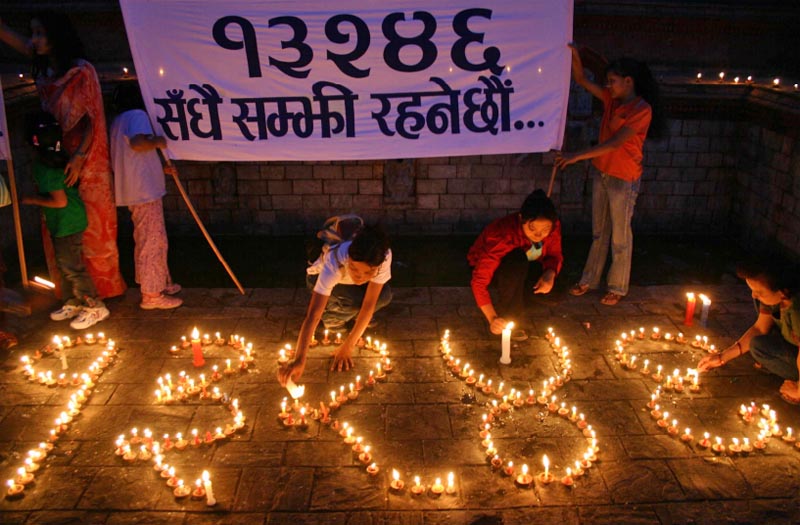 FILE - Candle light vigil in memory of Nepal conflict victims. Photo: Nepal Conflict Report, 2012
Conflict victims of the decade long insurgency have been waiting for justice from the state. The government had formed the Truth and Reconciliation Commission (TRC) and the Commission of Investigation on Enforced Disappeared Persons (CIEDP) two years ago. All the members were picked and nominated under the major parties’ quota system. Now the process of one year extension of these bodies tenure is in progress. However, conflict victims have cast doubts over their efficacies because of their political affiliations “Conflict victims question TRC’s efficacy” (THT, February 7, Page 1). Both the commissions have not yet been able to produce any concrete results even after collecting thousands of conflict-era complaints from the affected people. Internal rifts among the members of these transitional justice bodies surfacing from time to time does not give a positive indication of its capabilities of settling Maoist insurgency-era pending cases soon. Both TRC and CIEDP have completely failed so far to investigate such complaints. It was said from the very beginning of their formations that they should be free from political interference. Having said that, they could not be free from the major parties’ political influences and they have not been able to perform according to domestic laws and international norms and practices. People have started saying that unless these bodies are kept free from major parties’ political influence it does not make sense to extend their terms for another one year. The law pertaining to these bodies is yet to be amended for them to act properly. The government is still reluctant to amend the law and equip these bodies with necessary human resources and other logistics. For these reasons, these bodies will continue to be inactive. As a result, the victims will not get fair justice prompting enmity against the state and the perpetrators. If this situation arises, the chances of social disharmony among the people will start surfacing causing the community to disintegrate. Time has come for the government and major political parties to be serious and committed to make these bodies free from their political influences, enact the laws and equip them with adequate human resources at the soonest possible. Rai Biren Bangdel, Maharjgunj Untrue It is said that Nepal is an agriculture-based country. Almost 65 per cent of the people depend on agriculture. To inspire farmers in the agriculture sector the media should carry various news and views in their publications about the new technology and methods being applied in the agriculture sector, but shouldn’t miss to inform anyone on these. But THT published a picture of Salyantar, Lalitpur with a wrong caption reading “Farmers harvesting potatoes on their field” (THT, February 6, Page 2). They were actually planting potatoes in their fields, not harvesting potatoes. Jaganath Sujakhu, Bhaktapur
#agriculture #Truth and Reconciliation Commission #insurgency #conflict victims #Commission of Investigation on Enforced Disappeared Persons #CIEDP #TRC
You May Also like: