LETTERS: Lodges in the parks 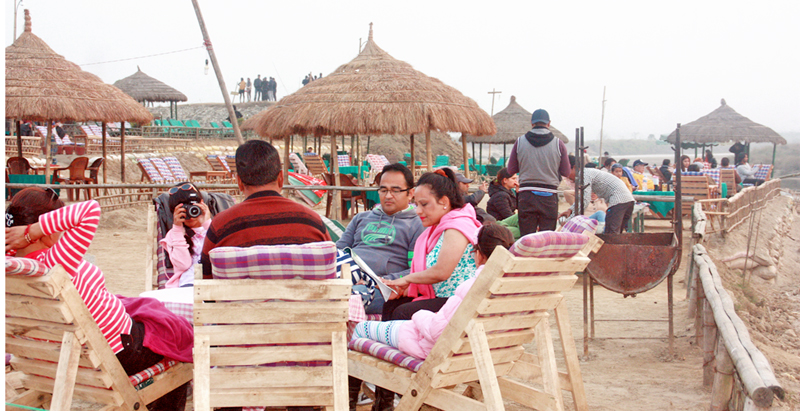 Tourists enjoying at a restaurant along the bank of Rapti River in Sauraha of Chitwan district on Thursday, January 7, 2016. Photo: RSS

This has reference to your editorial “Policy inconsistency” (THT, Feb. 3, Page 8). Those who have been following travel trend in the country can safely claim that Nepal’s wildlife tourism has been wildly famous for the past several decades. At one point in time, our parks, prominently Chitwan and Bardia, pulled luxury tourists from around the world. There were examples of several tourists travelling all the way to Nepal to spend a few nights only in Chitwan. It goes without saying that the unique environment of our parks, considered by educated, sophisticated and knowledgeable nature lovers as examples of unique bio-diversity, was well complemented by the high standard of service and facilities of the lodges inside the park. In Nepal, it would not be very easy to poach animals in the parks heavily guarded by the Nepali Army without abetment of people in the corridors of political power. For regulators to say that they are against lodges inside the park because they do not have the capacity to monitor the ‘smuggling of endangered animals and plants’ is too naive and is not the whole truth. It would be much better not to ever make a policy U-turn so that we can better safeguard our priceless and varied nature kingdoms. This may, however, not be possible without the will of Bhismapitamaha. With all politicians from the national down to the village level, bureaucrats, especially those from wildlife and national parks, big time traders and even small time farmers near the parks all aspiring to own hotels in or around the parks, we can expect them to try to pressure the government to open the parks for lodges. Lodges in India are not allowed inside the national parks to control undesirable human intervention. Perhaps, we should follow India’s lead and never allow any commercial lodges as far as possible?

It’s obvious that Nepal is rich in diverse floras and faunas. This is a matter of delight for us. Meanwhile, failure to combat hunting and poaching of such rare species is a matter of serious concern. To make the matter worse, the concerned authorities have failed to protect native birds like “Chakhewa” found only in Nepal. There must be a strict law to prevent the smuggling of rare birds and other endangered animals. The national parks, reserves and protected areas and the country’s floras and faunas can be better safeguarded if the local communities also get economic benefits from these natural habitats. Wildlife tourism is the best approach to protect the parks and wildlife. But the wildlife tourism must be linked with the livelihood of the local people who can be best protectors of the nature. The concept of community forestry is an example which has not only helped protect the forest and environment but also generate income for the community people.