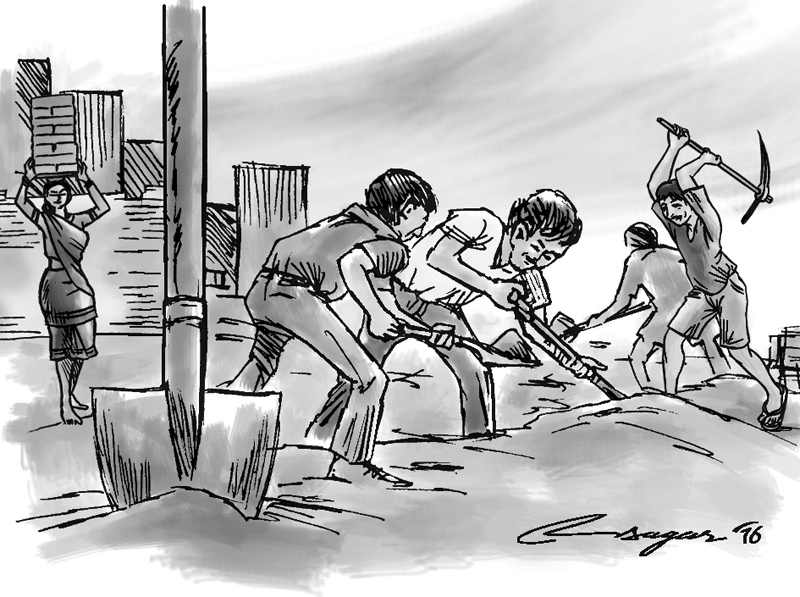 At present Local   Self Governance Act (LSGA) 1999 is in function, but very soon, it will be   replaced by Local Governance Act, which is almost at its final stage. LSGA, 1999 gave a comprehensive positive list of functions to the levels below the   District Development Committees (DDC), Municipality and Village Development   Committees (VDC) including establishing local self-development plans,   providing and maintaining infrastructure and social development and collecting their own revenue. In this case, framework for functional   assignment was determined by national government. Up   to now, DDCs, Municipalities and VDCs are working as sub national   governments. After LSGA, they have clear mandates and revenue resources. Local   body’s fiscal commission has been conducting an independent analysis of their   minimum conditions and performance measure (MCPM) on a yearly basis. They   allocate additional budget based on the result. In the new context, there are three tiers of government-- federal, provincial and local. Functional assignment in federal system is expected to get better service delivery. It could happen through improved provisioning of accountability, enhanced mechanism for improving competence of service delivery and better financing alternatives. In federalism, constitutionally distributed powers among all three tiers of government may enhance political accountability and policy-making skills by bringing government closer to the people and politicians that are more responsive to local needs and interests. It also helps empower citizens and contribute to decision-making process. This decentralization is expected to improve effectiveness of service delivery. The big reduction in the number of the 3,500 units of local government will make the performance of sub national governance very important for effective local service delivery. The constitution has given a sketch of functional assignments to different tiers of government of Nepal. But there are concurrent lists; it needs huge exercise for unbundling. The Government has not been able to finalise the shapes and sizes of sub-national government. There are lots of inconsistencies on the power lists which are positive and negative, that are important issues, but huge political deadlock is going on. It took Nepal six years to come up with constitutional provisions which are still inconsistent. In Nepal, the power issue was more important in holding back decisions than technical sector considerations. There are 5 annexes for defining functions for different levels of government. In this transitional period the government has been trying to make local governance act as a federal act. That is also controversial because of it is disturbing the local autonomy. We, as local government associations are participating on assigning functions for local level although it is declared in constitution that local level governments have power to make their laws and regulations to exercise the given powers. Though the government is saying it is only for transitional period, there is a big question mark for making a conducive environment for capable and free local level governments. Up to now, Nepal’s 75 District Development Committees (DDCs) make up the top tier of local government in Nepal. The second tier is occupied by the rural areas by the 3,157 Village Development Committees (VDCs) and in the urban areas by 217 Municipalities. The third tier is made up of wards, with nine wards per VDC. The term ‘village development committee’ is commonly used to refer both to the geographical area and the executive VDC committees of elected and nominated VDC officials. In the changed context, some of the functions like secondary education and local services have been assigned to the local government. The subsidiarity principle of decentralization states that functions should be assigned to the lowest level of government competent to provide efficient delivery of services. Although there are seven provinces based on identity and capability, it is being criticised by various sectors since promulgation of the constitution. The government has also registered a Bill to amend the constitution. The proposal addresses issues related to delineation of provincial boundaries, citizenship, formulation of language policy and representation in the national assembly. This may also affect the appropriateness of functional assignment unbundling. These exercises may have to be fine-tuned once the government completes the work of state restructuring work. Capacity of local level is difficult to say because there have been no elections conducted yet for the last almost two decades. As the capacity level of the receiving entity is a legal concern, we argue that it is often used as a destroyer argument to stop decentralization early on. A lot of ability is normally gained in the method of transferring funds, staff and assets. The different modality of decentralization provide plenty of space for adjusting decentralisation reforms with existing potential and for moving from more incomplete forms of de-concentration and delegation to outright transference. Neupane is the ExecutiveSecretary General of Association of District Development Committees of Nepal (ADDCN)
#Local Governance Act #Local self-governance
You May Also like: