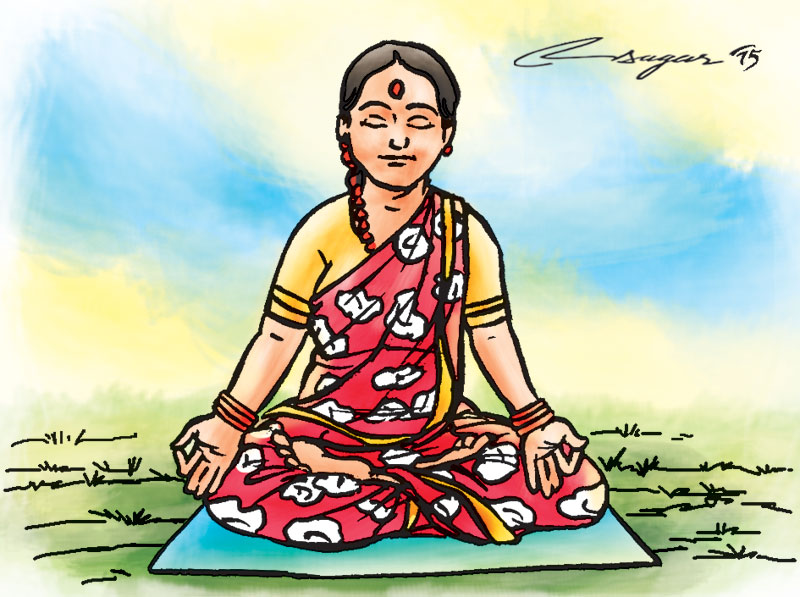 Yoga has become a foremost need of the current generation. Graudally, people are recognizing the importance of Yoga. The other important reason of growing popularity of Yoga is that it doesn’t distinguish  people on the basis of race, caste, tribe, age or religion

The vast technological and scientific advancements made in the current decade have made our day-to-day life very intricate and hectic. Most aspects of the average modern lifestyle move at a rapid pace. In the era of Wi-Fi networks, internet, cell phones, beepers, and excessive burden of work, people do not have time for even eating and resting properly. Due to cut-throat competition and the rat-race, stress has filled their lives, making them frustrated, tense, and miserable. Therefore, physical as well as mental relief is the first and foremost need in the current time. In such a critical situation of stress and anxiety, Yoga has proved itself as a panacea by giving a welcome relief to stress-stricken people. Yoga is simply a science of healthy living. For a common man, it is a fashion for keeping himself healthy and fit. While for some others, it is a boon for developing their concentration, memory and creativity. It helps to improve muscle strength, stamina, immune stability, perpetual sharpness, intelligence, memory, emotional stability and altogether maintain a positive physical and mental health. The term Yoga means the art of joining. Yoga is that which unites. In other words,”it is the union of the individual self or soul with the universal self or soul”. It is an expansion of the narrow constricted egoistic personality to an all pervasive, eternal and blissful state of reality. In modern practice, Yoga is a special skill which makes the mind reache its subtler state. Yogasans reduce the over-stimulation of the nervous system and activate the “rest and repair” of the parasympathetic nervous system. The science of Yoga benefits all through practical lifestyle tips, like vegetarian diet, positive thinking, and meditative practices; thus assisting in rooting out stressful conditions. Hence, Yoga has been a remedying key to such self-created mental stress in people’s lives. Although many people practise Yoga to fight with stress and multifarious maladies, they start reaping the fruits of spiritual bliss that comes from within as they begin to realize themselves as the soul and an eternal fragment of God. Indisputably, Yoga’s main purpose is to bring a soul to the attainment of the Supreme. Nevertheless, the Yogic practices such as asana, pranayam, dhyan, shatkarm, etc. also yield several bodily and mental benefits. Everyone is busy in schedules nowadays, but they are becoming health conscious too. People have started realizing that “health is wealth”. Maharshi Patanjali, the founder of modern Yoga says,”Sarir dharmam khalu dharma sadhanam.” Which means health is the prime aspect for every works. And now there arises a need of Yoga to be physically as well as mentally fit. Many of the common health and social problems cannot be solved through germ theories, antibiotics, vaccines or surgeries. The fascinating diagnostic tools have started pointing to the role of mind on matter. Biochemical, psychological, neuro-physiological and immunological researchers are recognizing the role of lifestyle, stress, suppressed emotions and so on as the cause of the many challenges faced today. Hence, the health professionals are forced to accept the paradigm shift in the approach of understanding human health problems. There are many other systems that people follow in order to develop their personality, health, and fortune. Nonetheless, personal experience tells us that these practices have not helped us develop the spiritual side of our personality. A healthy body and a composed mind are the building blocks for attaining our goal in this life. In this regard, Yoga has been a successful alternative therapy to diseases like asthma, high blood pressure, constipation, spondylitis, etc., where even the modern allopathy has not succeeded. The regular practice of various Yogic methods has shown many positive results even in cases of cancer, HIV/AIDS, diabetes, etc., by reducing their detrimental effects, by working at the cellular level, and increasing the resistance power of each cell in the body. Apart from benefitting individuals, Yogic practices like asans and dhyan done with God’s Name and His Form help uproot social disorders and chaos. In this way, Yoga can establish the forgotten past values and norms among the people in modern time. It can also spread the message of harmony, order, non-violence, truth, charity, integrity, and spirituality, among all, by bestowing with incredible advantages of inner peace to the ones who do it sincerely and regularly. Yoga has become a foremost need of the current generation. Graudally, people are recognizing the importance of Yoga. The other important reason of growing popularity of Yoga is that it doesn’t distinguish  people on the basis of race, caste, tribe, age or religion. Yoga is not only a matter of theory, but its substratum also lies in practicality and action. For this reason, the present generation should learn it in order to hone their lives materially, mentally, and spiritually. Through its sincere practice, people can realize that true Yoga is established within oneself and not externally, and that the rich source of inner evolution must be searched within, turning back from the outer world. People can then realize themselves as not a physical body, but an eternal soul, which is naturally an eternal servant of God. This not only develops a spiritual and healthy individual but also a better society and world.
#Yoga #Meditation #practising yoga
You May Also like: