The government should instantly address the vehicle emission and dust sprawl, the latter arising out of careless construction activities and garbage dumping, before Kathmandu gets caught in the floodlight, akin to what Delhi is at the moment 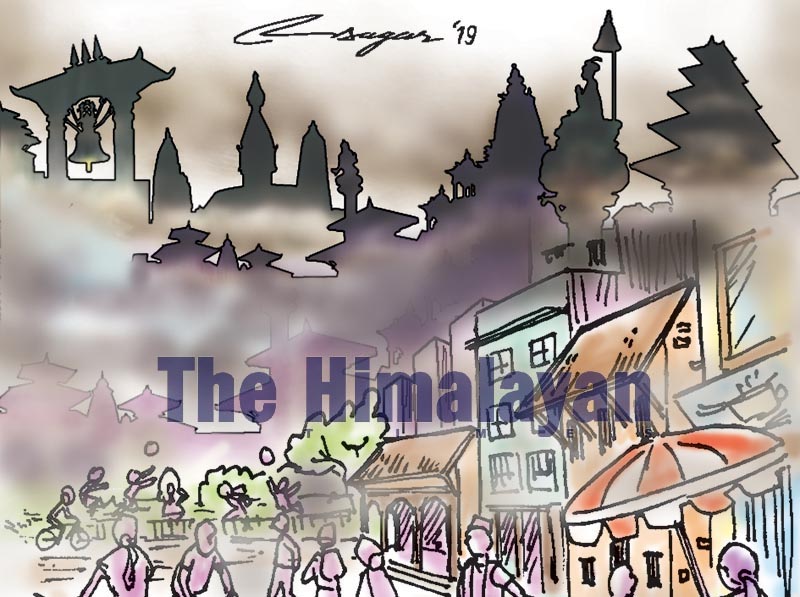 It is often said in political circles that umbrellas go up in Kathmandu when the rain god descends from heaven in Delhi. This, however, does not appear to be the case in the case of pollution. While New Delhi has been virtually choked after being enveloped by a thick blanket of smoke, the government in Kathmandu appears to be still in a state of honky dory. It is perhaps still blinded by the glitter of the two-thirds majority it enjoys in the Parliament.

New Delhi has earned the ironic distinction of being the most-polluted capital city in the world.  Kathmandu may be miles away geographically from New Delhi, but it stands back to back in the case of pollution. Like the doctor initially measuring the blood pressure, pollution is assessed by the Air Quality Index. It is considered to be good, satisfactory, unhealthy, very unhealthy as well as hazardous respectively if it is within the range of 0 to 50, 51 to 100, 101 to 150 and beyond. This is measured by using an equation involving several factors, such as pollutant concentration and the likes.

This index measured at the Ratna Park station was 153 for Thursday morning, which pushes Kathmandu in the unhealthy range. For Delhi, it exceeded even 500 during some of the nightmarish days last week.

Particulate matters of size 2.5 and 10 micrometers (PM 2.5 and PM 10), ozone, carbon dioxide, nitrogen dioxide and sulphur dioxide are the other indicators of pollution. All of these are so high in the Air Quality Index that the WHO standards have been dwarfed beyond recognition. Consequently, Nepal ranks second, but from the bottom, as the 177th country, out of 180 countries, in the Environmental Performance Index.

Many factors have been held responsible for this state of affairs. In the case of Delhi, the stubble burning in Punjab and Haryana is the towering one. In fact, quite a bit of it finds entry in our saucer-shaped Kathmandu Valley as well. People are being suffocated amidst the blame game scenes between the central and state governments in India at the moment.

Like two fast bowlers that hunt in a pair in cricket, as do our Karan KC and Sompal Kami, vehicular emission and the unmanaged construction coupled with garbage dumping have been chiefly responsible for the pollution in Kathmandu.

Pollution has been something of an undesired entity right from the mythic times. It is mentioned in the Srimadbhagwat that Bhagirath got the blessing from Mahadev after undergoing severe penance for thousands of years to get Ganga down to the earth, who was otherwise merrily circling around the hair in thick deadlocks of Mahadev. The purpose was to enable the ascent of his hell-bound ancestors, unfortunately cursed by Sage Kapil, to heaven. It was only possible if they got a dip in the Ganga. Ganga declined saying that people would wash their sin and make her dirty.

But Bhagirath had already got the boon from Mahadev, and she had to descend to earth unwillingly. Today many rivers like the Yamuna in India and Bagmati in Nepal have been polluted, which Ganga had forecast thousands of years back.

At about the time that Junga Bahadur Rana made a visit to England in the year 1850, London was polluted beyond imagination. The Thames River, which flowed from the heart of the city, smelled so awfully that then Queen Victoria and her spouse Prince Albert had to retreat soon after they had gone for a boating cruise. This was despite two dedicated close-in-arms attendants - one spraying perfume and the other frantically fanning to drive the stink away.

One engineer, Joseph Bazalgette, had proposed laying out two large sewers to receive the sludge from the houses culminating into a treatment plant outside the city. This proposal gathered dust for years in the cupboard as it was dumped by the bureaucrats and their all-weather friends, the politicians, labelling it to be a maintenance monster. After the pollution reached an astronomical level, the proposal was implemented. London returned to its pristine form, and Joseph was knighted for this noble deed in the year 1874.

Nearer home in Asia, in Japan, the city of Kitakyushu was so polluted that it was known as the city of death due to the loss of several lives. But wisdom prevailed, and attention was focused by the government in its cleansing. It is now one of the cleanest cities of the world.

What was an ugly duckling transformed into a stunningly beautiful celestial nymph. It is supporting cities like Shanghai of China and many others, which are mired in the morass of pollution.

It is then clear that pollution may be a multi-headed chimera, but it can certainly be brought into control as the London and Kitakyushu examples glaringly show.

But the nonchalance on the part of the government in Kathmandu is likely to transform a safe haven into gas chambers as in Delhi, leaving its innocent people virtually suffocated. Kathmandu has not deteriorated as much as Delhi, but it can take the turn for the worse because its saucer-shape provides a safe shelter to the pollution as does the casement to the mighty sword.

The government should, therefore, instantly address the vehicle emission and dust sprawl, the latter arising out of careless construction activities and garbage dumping, before it gets caught in floodlight like a deer akin to what Delhi is at the moment.

#New Delhi pollution #pollution in Kathmandu
You May Also like: