Remembering a political hero: Lessons from him 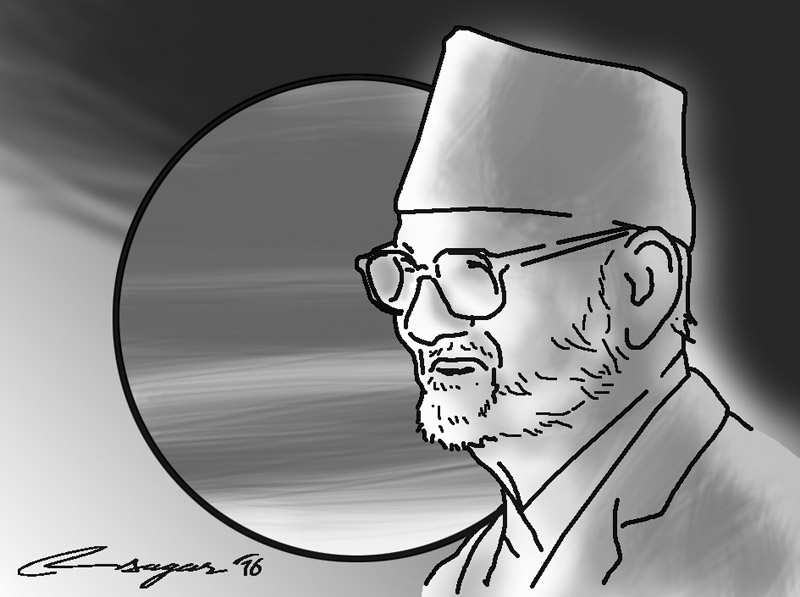 Life and death are natural events. No one is eternal. Everyone will die after taking birth. Now, democratic fighter and president of the biggest political party, Sushil Koirala, has passed away, and he is no more among us. But, we can learn many good things from his life. He has played a very important role for constitution making and promulgation paving the way for a new Nepal. He has always remained constant and as strong as a pillar for nationalism, democracy and for the principle of socialism. He will be always remembered as a devoted, selfless and simple man with a clean image. The departed leader Sushil Koirala, a former prime minister and president of Nepali Congress, was born to Bodh Prasad and Kumidini Devi on 3rd February, 1938 in Biratnagar of Morang. He later migrated to Nepalgunj of Banke along with his parents. He had been active in politics for over six decades. He was known as a leader never attracted to power or wealth and loyal to principles. He had been involved in the major activities of Nepali Congress parties such as the referendum of 1980, the Satyagraha, and pro-democratic movements of 1990 and 2006. He worked vigorously to unify the people and bring parties together in a spirit of compromise. Looking at his political journey, he took membership of the Nepali Congress party in 2012 BS and went on to become its central committee member in 2035 BS. He is famous as a dedicated, saintly person within the party. He was a skillful party organizer too. He was also known as a leader who put his words into practice and was a plain speaker. Moreover, he worked as the party general secretary for a long time. He was elected as the party president from the 12th general convention of the Nepali Congress. Koirala was known for his humble life style who spent his whole life in politics fighting for democracy in Nepal, and he led different historic protests, including the protest in 2006 that ended centuries-old monarchy and turned Nepal into a republic. His politics meant he was always in trouble with the country’s kings who had barred political parties since the 1960s, and was jailed for at least six years. He spent 15 years in exile in India because of his opposition to the no-party system imposed by the kings. Now, the demise of the towering democracy fighter has created a big loss and void in Nepali politics which is yet to get out of the complex transition and to the party building of the Nepali Congress. Koirala has made headway to peace and development after the promulgation of the new constitution in Nepali politics which frequently suffered from different setbacks. This very important responsibility was carried out under the capable leadership of Sushil Koirala. Of course, late Sushil Koirala played a role in turning the country in the right direction from a chaotic political situation. Though many still take the Nepali Congress and CPN-UML as the reluctant federalist forces in Nepal, it is the new constitution that has constitutionally paved the way to implement federalism now. In this way Koirala was the most democratic and progressive leader. Moreover, there are other very good features the late leader Koirala had which a Nepali and any political party can learn from and implement in practice. In the selfish and faithless politics of the day, the simplicity and lack of greed for personal benefit are the most remarkable features that all and, most importantly, a political leader can learn. Koirala was a man of courage and inspiration. Though he was ill, he used to say, I am fit and fine and encouraged others to work. Tributes and condolences have poured in from all over the globe. They have appreciated his simplicity of life, devotion to democracy and ability to bring a new popular constitution. If we look at him with reference to his political life, he will be remembered as an admirable leader with his strong adherence to constitutional democracy, an independent judiciary, law and morality, and leadership to bring the new constitution. Likewise, the demise of leader Sushil Koirala in the transitional phase is the demise of the first generation of Koirala family, and the upcoming general convention of the Nepali Congress will surely be affected. The former Prime Minister would always be remembered for his positive roles and commitment that he showed to the betterment of Nepal. He always inspired and stressed unity, consensus, coordination and conciliation in politics. Many dignitaries around the world have described him as an honest, unblemished leader, who led a simple life. They have remembered him for his long struggle for the establishment of democracy and for his role in introducing a new constitution during his prime ministership. In conclusion, the late Koirala was a stalwart of democracy. His lifelong devotion to democratic values contributed to make democracy functional in Nepal, making the people sovereign and, most importantly, to bring the fully proportional and inclusive constitution. From his life, there is a lot that all the political parties and leaders can learn. If they can benefit from his virtues and become wiser from his mistakes and weaknesses, it will be the best homage they will be paying to the departed leader as well as for the good of the nation in the coming days.