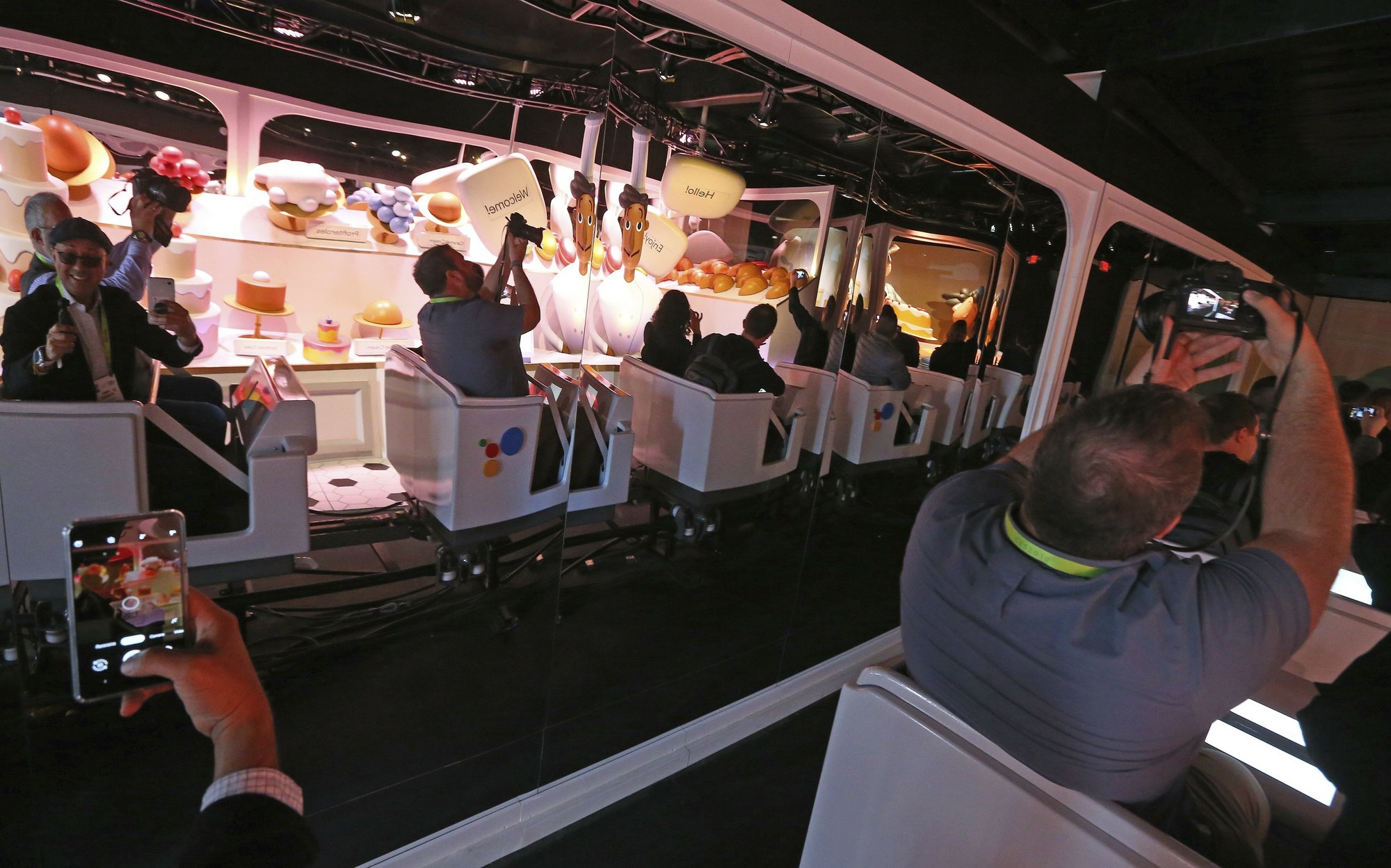 The Google Assistant ride shows off the new features in its voice-enabled digital assistant as visitors ride along at the Google display area at CES International on Tuesday, Jan. 8, 2019, in Las Vegas. Photo: AP

LAS VEGAS: The CES 2019 gadget show opened its doors Tuesday, with tech companies from giants to tiny startups showing off their latest products and services.

In recent years, CES’s influence has declined as Apple, Google and other major companies throw their own events to launch new wares. Still, more than 180,000 people from about 150 countries are expected to attend. The sprawling event spans 11 official venues, plus scores of unofficial ones throughout Las Vegas. The four-day show in Las Vegas opened after two days of media previews.

Voice assistants are getting pretty good at translating speech into text, but it’s a thornier challenge in artificial intelligence to enable real-time translation across different languages. Google’s new feature expands upon real-time translation services it’s rolled out to Android phones and headphones over the past year.

This is the second year that Google Assistant had made a huge splash at CES in an effort to outbid Amazon’s Alexa as the voice assistant of choice.

Google this year has an amusement park ride that resembles Disney’s “It’s a Small World,” though on a roller-coaster-like train at slow speeds. Talking and singing characters showcase Google’s various voice-assistant features as visitors ride along.

Google isn’t the only CES exhibitor promising the next generation of instant translation. Chinese AI firm iFlytek has been showing of its translation apps and devices that are already popular among Chinese travelers. And at least two startups, New York-based Waverly Labs and China-based TimeKettle, are promoting their earbuds that work as in-ear translation devices.

IBM is expanding its side job as the world’s meteorologist.

IBM CEO Ginni Rometty used a keynote address Tuesday to unveil a new global forecasting system that promises more accurate local weather reports in places that never had them before.

The computing giant owns The Weather Company, which runs popular weather services including weather.com and the Weather Channel and Weather Underground apps (though not the Weather Channel television network). Those apps provide precise and constantly updating forecasts in places like the U.S. and parts of Europe and Japan, but not in most of the world.

Weather Company CEO Cameron Clayton says the new system is intended to aid IBM’s business providing critical weather data to airlines, energy firms and other industries. But he says it will also have societal benefits, such as helping small farmers in India or parts of Africa yield better crops.

IBM may have trouble persuading some users to agree to transmit atmospheric data to IBM after the city of Los Angeles sued last week to stop the Weather Channel’s data-collection practices. The lawsuit alleges that the company uses location information not just to personalize weather but also to track users’ every step and profit off that information. The company has denied any impropriety with sharing location data collected from users, saying it does disclose what it does.

Up next for Samsung: a robot that can keep its eye on grandma and grandpa.

The rolling robot, which talks and has two digital eyes on a black screen, can track medicines they take, measure blood pressure and call 911 if it detects a fall.

The company didn’t not say when Samsung Bot Care would be available, but brought the robot out on stage Monday at a presentation at CES. Samsung also said it is working on a robot for stores and another for testing and purifying the air in homes.

Samsung also unveiled TVs, appliances and other high-tech gizmos — but not a foldable phone it hinted at in November. But a startup called Royole did. The Royole FlexPai smartphone was first shown in November but the California-based company has more details. The phone will have a 7.8-inch display that can be folded like a wallet, priced at more than $1,300.

Sony brought some star power to CES with a visit from musician Pharrell Williams, straight from trip to Anguilla.

The star of hit songs such as “Happy” came to talk about a mostly secret project that he and Sony are supposedly undertaking. But in the end, it was clearly an attempt by Sony to sprinkle some stardust on launches for TVs and other products.

“I was a little bit worried that he was still on holiday, but he is here,” Sony Music head Rob Stringer told the crowd.