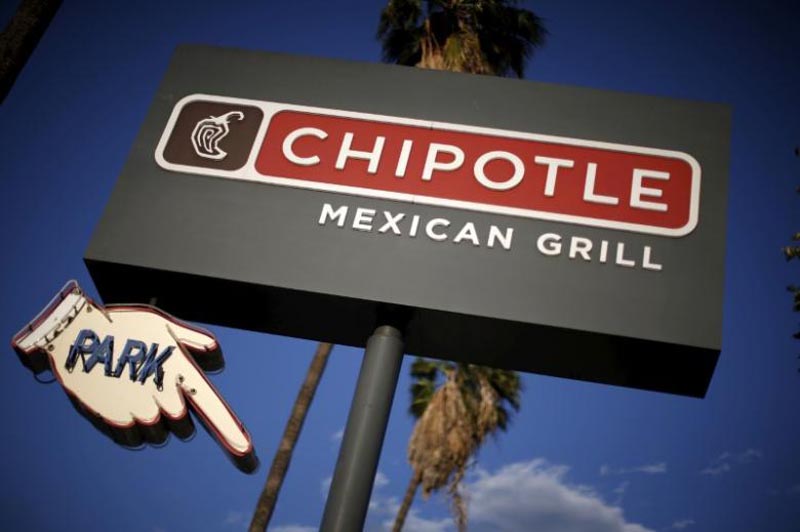 Signage for a Chipotle Mexican Grill is seen in Los Angeles, California, United States, on April 25, 2016. Photo: Reuters
Hackers used malware to steal customer payment data from most of Chipotle Mexican Grill Inc's restaurants over a span of three weeks, the company said on Friday, adding to woes at the chain whose sales had just started recovering from a string of food safety lapses in 2015.Chipotle said it did not know how many payment cards or customers were affected by the breach that struck most of its roughly 2,250 restaurants for varying amounts of time between March 24 and April 18, spokesman Chris Arnold said via email. A handful of Canadian restaurants were also hit in the breach, which the company first disclosed on April 25. Stolen data included account numbers and internal verification codes. The malware has since been removed. The information could be used to drain debit card-linked bank accounts, make "clone" credit cards, or to buy items on certain less-secure online sites, said Paul Stephens, director of policy and advocacy at the non-profit Privacy Rights Clearinghouse. The breach could once again threatens sales at its restaurants, which only recently recovered after falling sharply in late 2015 after Chipotle was linked to outbreaks of E. coli, salmonella and norovirus that sickened hundreds of people. An investigation into the breach found the malware searched for data from the magnetic stripe of payment cards. Arnold said Chipotle could not alert customers directly as it did not collect their names and mailing addresses at the time of purchase. The company posted notifications on the Chipotle and Pizzeria Locale websites and issued a news release to make customers aware of the incident. Linn Freedman, an attorney at Robinson & Cole LLP specializing in data breach response, said Chipotle was putting the burden on the consumer to discover possible fraudulent transactions by notifying them through the websites. "I don't think you will get to all of the customers who might have been affected," she said. Security analysts said Chipotle would likely face a fine based on the size of the breach and the number of records compromised. "If your data was stolen through a data breach that means you were somewhere out of compliance" with payment industry data security standards, Julie Conroy, research director at Aite Group, a research and advisory firm. "In this case, the card companies will fine Chipotle and also hold them liable for any fraud that results directly from their breach," said Avivah Litan, a vice president at Gartner Inc specializing in security and privacy. Chipotle did not immediately comment on the prospect of a fine. Retailer Target Corp in 2017 agreed to pay $18.5 million to settle claims stemming from a massive data breach in late 2013. Hotels and restaurants have also been hit. They include Trump Hotels, InterContinental Hotels Group as well as Wendy's, Arby's and Landry's restaurants. Shares in Chipotle Mexican Grill ended marginally lower at $480.15 on Friday following the announcement.
#malware #hacker #Chipotle Mexixcan Grill Inc #customer payment data #food safety lapses #canadian restaurants #stolen account numbers #stolen internal verification codes #Privacy Rights Clearinghouse #Robinson & Cole LLP #Retailer Target Corp
You May Also like: