KATHMANDU: In the wake of COVID-19 pandemic, applications to enable digital contact tracing of the disease are being rolled out around the world. At the onset of May, New Zealand introduced its first contract tracing application. Likewise, Japan had announced its own version by the end of April, and India’s Aarogya Setu mobile application topped 100 million users in just 41 days after its release. Nepal too has been quick in coming up with mobile application of its own like the web-based self-testing application from the Nepali Congress and the COVID NP application for contact tracing purposes launched by the Crisis Management Centre-Operations under Nepal government on May 10. The COVID NP app traces the community and anonymous individuals by using GPS coordinates and Bluetooth connectivity from mobile phone with access permission, which as per its terms and conditions, does so without compromising user privacy and data security measures. It gives colour-coded designation to users as per their health status and travel history while also helping the user know if s/he is near anyone who has tested positive for the deadly virus. “So far, the feedback has been positive and it can be a key element in the government's test, track and trace strategy to stop the spread of the disease,” contends Samir Kumar Adhikari, Joint Spokesperson at Ministry of Health and Population. 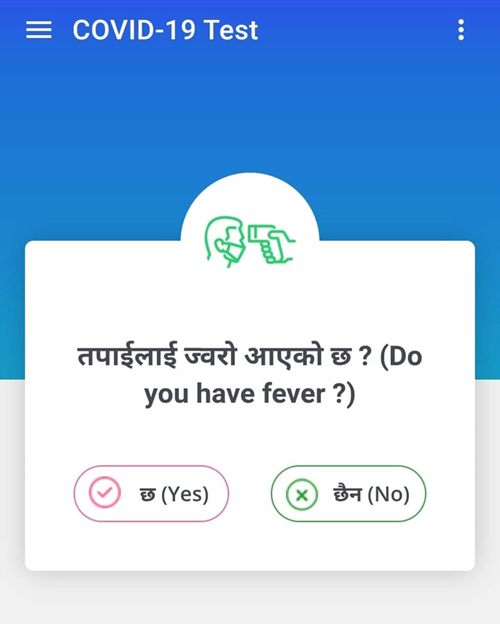 A cropped screenshot of the interface from COVID NP application.
To be effective though, a contact-tracing app needs to be used by around 80 per cent of the smartphone user population. Unfortunately, in the case of Nepal, the application has simply not been able to gain that amount of reach. Unlike the Aarogya Setu’s success India, here the app’s popularity has been somewhat slow with the Play Store showing the total number of downloads just a little over 5,000. As per Adhikari, by the end of May 24 over 1,30,000 Nepalis have so far registered in the app — an insignificant number as compared to the population of Nepal (28.2million in 2016 — according to a 2017 report of the Ministry of Population and Environment). Like Nepal, most nations are contemplating the viability of their own government-developed apps, which has even resulted in some countries deciding to scrap their COVID-19 tracing application in favour of tech built by Apple and Google. In a rare collaboration, Apple and Google released the first version of its long-awaited smartphone technology on May 20 that notifies people automatically if they may have been exposed to the coronavirus. It uses Bluetooth wireless technology to detect when someone who has downloaded the app has spent time near another app user who later tested positive for the virus. But questions remain over the viability of the coronavirus contact tracing app. Apple and Google's tech is meant to be integrated with government apps — but many governments' contact tracing tech is incompatible with privacy promises made by Apple and Google. Apple and Google have barred authorities using their technology from collecting GPS location data or requiring users to enter personal data like phone numbers. The COVID NP app as well makes use of personal data for tracing purposes, which is in contrast to the terms of Apple and Google. The debate over which contact tracing technology to use hinges on questions of privacy and data ownership and it has also spiked interest of Anil Pokharel, Chief Executive at National Disaster Risk Reduction and Management Authority. “We are monitoring the new app and the privacy concerns related to the app, but right now it’s too early to say if Nepal will be considering using the Apple Google tech,” adds Pokharel. In the context of Nepal, the decision to adopt the new modern technology hasn’t been brought up at the national level with officials at the Health Ministry still caught unawares of the new app that has swept across the globe. “With growing cases in Nepal, we are making plans to strengthen testing and tracing and are now observing nations who have adopted the new Apple-Google app to monitor its feasibility and privacy concerns,” informs Pokharel. So far, 23 nations have decided to move forward with the Apple-Google technology. Most countries that have sought to develop their own technology are experiencing glitches, draining device batteries and seeing limited adoption. In Nepal too, some of the app’s users have expressed their concern over COVID NP consuming significant battery power. Apple and Google have said their app addresses this issue along with a host of other advantages.
#google #Apple #COVID-19 #contact tracing #contact tracing application #COVID NP application
You May Also like: