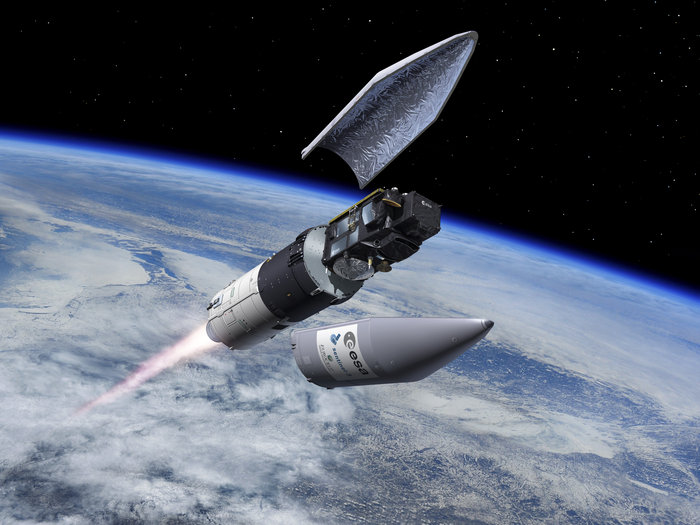 Artist's view: Artist’s view of the launch of Sentinel 3A aboard a Russian Rockot vehicle. This illustration depicts the Rockot’s payload fairing jettisoning a few minutes after liftoff, revealing Sentinel-3A. Credit: ESA/Pierre Carril
FRANKFURT: Europe launched a satellite on Tuesday that will help predict weather phenomena such as El Nino and track the progress of global warming as part of the multibillion-euro Copernicus Earth observation project. The Sentinel-3A satellite, part of a system of satellites that is to monitor Earth, blasted off on board a Rockot launcher from the Plesetsk cosmodrome in Russia's north-western Arkhangelsk region at 12:57 pm EDT (1757 GMT) on Tuesday. It headed for orbit 815 km (506 miles) above Earth, from where it will collect data on sea surface temperature and height that will contribute to more precise weather forecasts and help forecast the impact of rising temperatures. "When we speak about global warming we often focus on rising air temperatures, but 90 percent of the energy put out on our planet ends up in the ocean," Volker Liebig, director of the European Space Agency's (ESA) Earth Observation program, told Reuters ahead of the launch. Data from Sentinel-3A, which is to work in tandem with another satellite to be sent up in mid-2017, could also help shipping companies chart more efficient routes and may be used to monitor forest fires and oil spills and to forecast crops. The Copernicus project, for which the European Union and the European Space Agency (ESA) have committed funding of more than 8 billion euros ($9 billion) until 2020, is described by the ESA as the most ambitious Earth observation program to date. The launch of the Copernicus project became especially urgent after Europe lost contact with its Earth observation satellite Envisat in 2012 after 10 years. Images taken by Sentinel-3A are lower-resolution than those from the first two satellites that the ESA sent up for Copernicus -- Sentinel-1A and 2A -- but the 3A will cover a wider swathe of Earth. It can deliver images of the whole planet within about two days, which will be cut to less than a day once its twin 3B joins it next year. That compares with around six days for the two Sentinel-1 and Sentinel-2 satellites, the ESA's Liebig said.
#El Nino #European Space Agency #Copernicus Earth observation project #Satellite #global warming #Sentinel-3A satellite #Rockot
You May Also like: