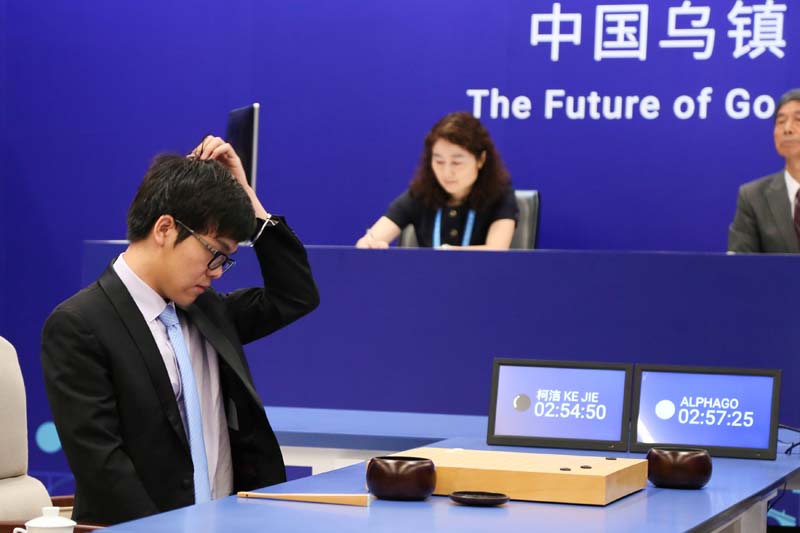 Chinese Go player Ke Jie reacts during his first match with Google's artificial intelligence program AlphaGo at the Future of Go Summit in Wuzhen, Zhejiang province, China, on May 23, 2017. Photo: Reuters
BEIJING: A Google artificial intelligence programme defeated a Chinese grand master at the ancient board game Go on Tuesday, a major feather in the cap for the firm's AI ambitions as it looks to woo Beijing to gain re-entry into the country. In the first of three planned games in the eastern water town of Wuzhen, the AlphaGo program held off China's world number one Ke Jie in front of Chinese officials and Google parent Alphabet's chief executive Eric Schmidt. The victory over the world's top player - which many thought would take decades to achieve - underlines the potential of artificial intelligence to take on humans at complex tasks. Wooing Beijing may be less simple. The game streamed live on Google-owned YouTube, while executives from the DeepMind unit that developed the programme sent out updates live on Twitter . Both are blocked by China, as is Google search. Google pulled its search engine from China seven years ago after it refused to self-censor internet searches, a requirement of Beijing. Since then it has been inaccessible behind the country's nationwide firewall. The ceremonial game - the second time AlphaGo has gone head-to-head with a master Go player in a public showdown - represents a major bridge-building exercise for Google in China, following a charm offensive in recent years. It has announced plans to bring some services back to the country, including its app store Google Play. In March it also said Chinese users would be able to access the Translate mobile app, marking its most recent success launching a previously banned service. Like AlphaGo, Translate also uses DeepMind's artificial intelligence software. Beijing is pushing to become a major player in artificial intelligence. Chinese search engine giant Baidu Inc, launched an AI lab in March with China's state planner, the National Development and Reform Commission. Go, most popular in countries such as China, South Korea and Japan, involves two contestants moving black and white stones across a square grid, aiming to seize the most territory. Its origins date back thousands of years. The board game is favoured by AI researchers because of the large number of outcomes compared to other games such as western chess. According to Google there are more potential positions in a Go game than atoms in the universe. AlphaGo made history when it beat a top South Korean professional player last year.
#Beijing #google #Alphabet Inc #National Development and Reform Commission #AlphaGo #Google artificial intelligence programme #Chinese master #Go #Ke Jie #DeepMind's artificial intelligence software
You May Also like: