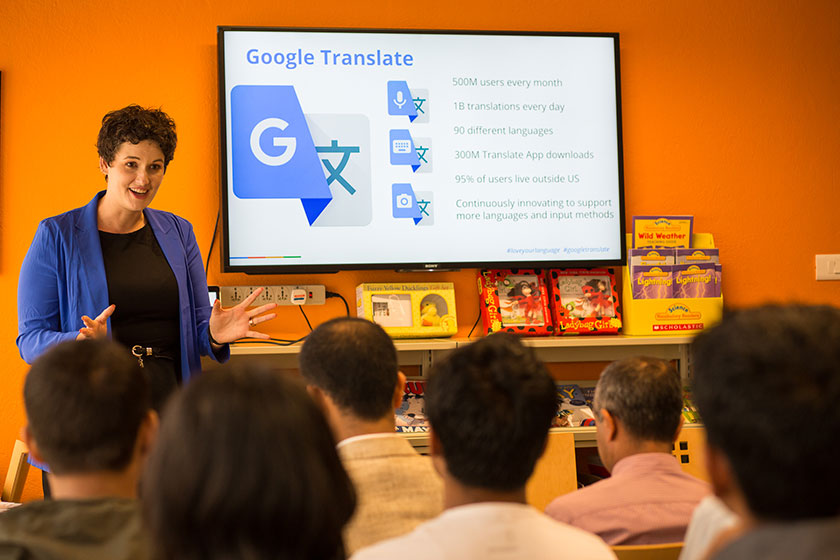 Google Asia Pacific’s Amy Kunrojpanya at an event on Google Translate in Kathmandu on Tuesday, September 22. Photo: Google Handout
KATHMANDU: With an aim to reduce the language barrier for Nepali speakers on the web, Google has launched "Love Your Language Nepal" campaign, which includes translate-a-thon series in Kathmandu, and invited Nepali translators, language experts and language lovers to help improve the quality of Nepali translations online. The translate-a-thon event kicked off in Kathmandu on September 21 and will continue till September 30. The technology company, which specialises in Internet-related services and products, has collaborated with the Language Technology Kendra and more than 40 Nepali academic institutions, organisations and businesses for the event. Google added the Nepali translation service in 2013. “We believe Google tools in the hands of our Nepalese users can help build a web that works for this country, its people and the Nepali language," Google Asia Pacific’s Amy Kunrojpanya, Head of Public Affairs & Communications for New Emerging Markets, said. "We’re introducing the Love Your Language campaign to open up the technology that powers Google Translate to communities passionate about their language in Nepal. Working together we can improve the understanding and quality of Nepali translations, which in turn can help preserve and promote Nepalese culture and language online.” Google Translate Community, a free crowdsourced translation tool, works with just few clicks or swipes on a mobile phone, tablet or laptop, and even just a few minutes can help millions of Nepalis around the world receive better translations, Google said. Moreover, Google has also introduced Google Handwriting Input for Nepali, which gives internet users a simple way to input text on their smartphone or tablet by writing out Nepali characters with their finger or stylus pen. "For those who find it difficult to use small keyboards in complex language scripts, or for older internet users who find typing to be a barrier, Google Handwriting can help them gain access to Nepali web content and the wider world." “If you’ve got access to the internet, no matter what device you have, you can help improve Nepali online. So why not take a few moments and let your feedback help millions?” added Kunrojpanya. "Even if you can’t make it to an event, you can still join the fun online at translate.google.com/community," Google said in a statement.
#google #Google translation #Google Translate #Google Nepali #Love Your Language Nepal #Google Translate Community
You May Also like: