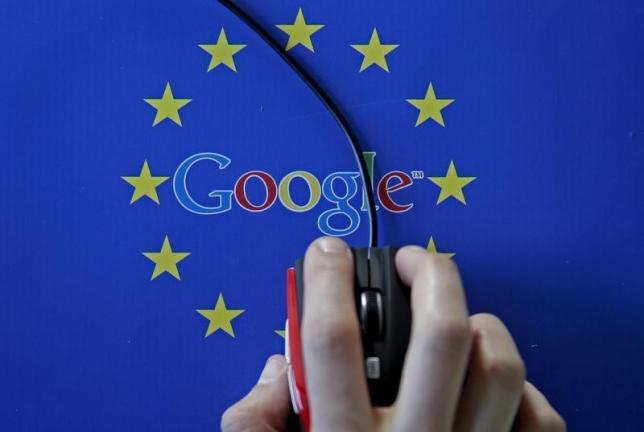 File - A woman hovers a mouse over the Google and European Union logos on April 15, 2015. Photo: Reuters
Alphabet's Google has been given until the end of October, the fourth extension, to rebut EU antitrust charges that it uses its dominant Android mobile operating system to block competitors, the European Commission said on Monday. The Commission in April said the US technology giant's demand that mobile phone makers pre-install Google Search and the Google Chrome browser on their smartphones to access other Google apps harms consumers and competition. The EU watchdog had initially set a July 27 deadline for Google to respond to the charges. This had been extended three times at the company's request, with the previous deadline September 20. The new deadlines are Oct. 31 for the Android case and October 26 and October 13 for cases relating to online search advertising and shopping. In the shopping case, Google has been accused of favoring its shopping service over those of rivals in internet search results while the AdSense case centres on the company's measures which block competitors in online search advertising. "In each of these cases, Google asked for additional time to review the documents in the case file. In line with normal practice, the Commission analyzed the reasons for the request and granted an extension allowing Google to fully exercise its rights of defence," Commission spokesman Ricardo Cardoso said in an email. The EU antitrust enforcer intends to hit the company with deterrent fines in the Android and shopping cases, according to charge sheets seen by Reuters. Google can be fined up to $7.4 billion, or 10 percent of its global turnover, for each case if found guilty of breaching EU rules.
#google #Alphabet #google search #EU's Android antitrust charges #European Union Google #Google Chrome browser
You May Also like: