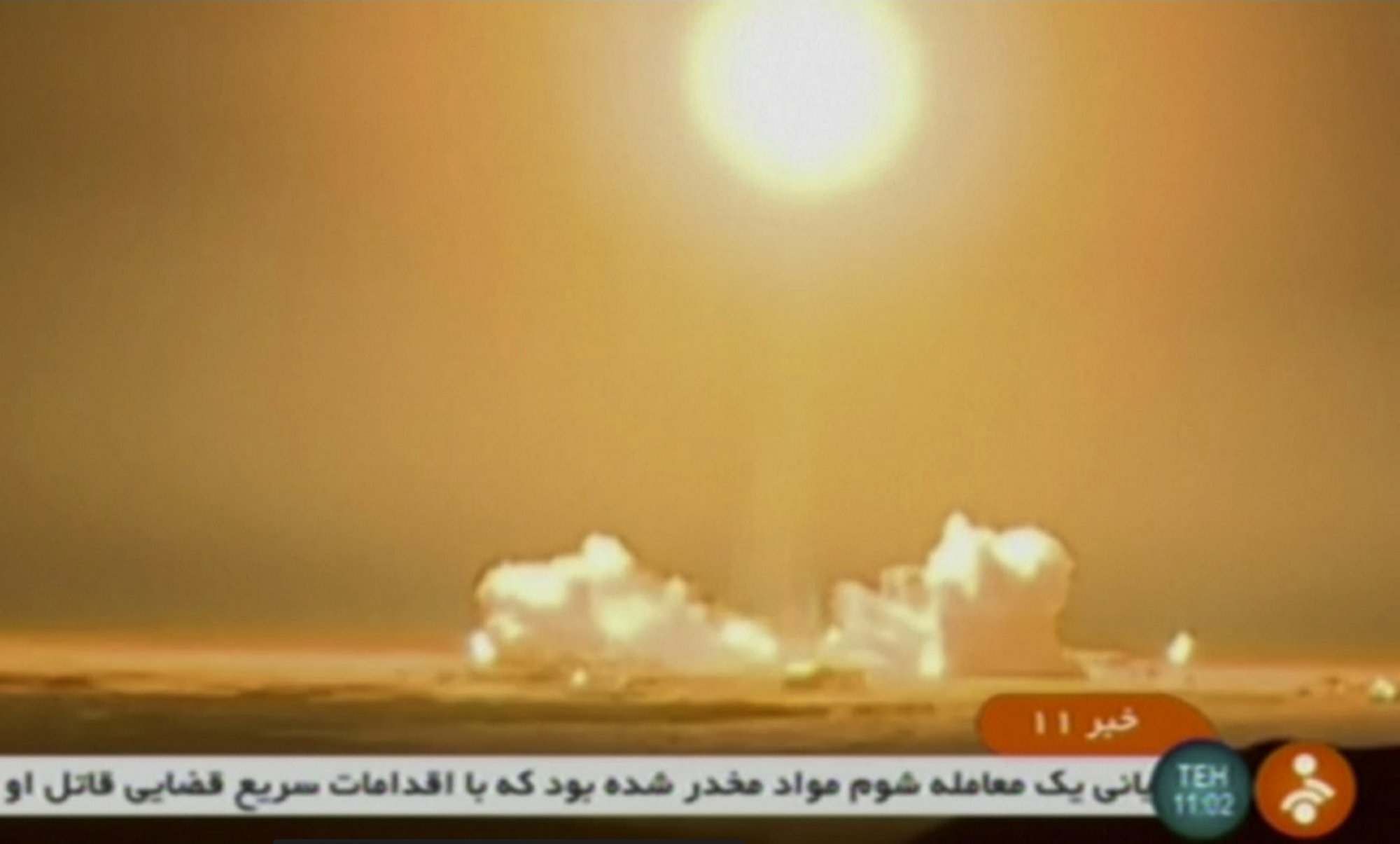 In this frame grab from Iranian state TV, a video, a rocket carrying a Payam satellite is launched at Imam Khomeini Space Center, a facility under the control of the country's Defense Ministry, in Semnan province, Iran, Tuesday, on Jan. 15, 2019. Photo: AP
TEHRAN, IRAN: An Iranian satellite-carrying rocket blasted off into space Tuesday, but scientists failed to put the device into orbit in a launch criticized by the United States as helping the Islamic Republic further develop its ballistic missile program. After the launch, Secretary of State Mike Pompeo repeated his allegation that Iran’s space program could help it develop a missile capable of carrying a nuclear weapon to the mainland US, criticism that comes amid the Trump administration’s maximalist approach against Tehran after withdrawing from the nuclear deal.   Iran, which long has said it does not seek nuclear weapons, maintains its satellite launches and rocket tests do not have a military component. Tehran also says they don’t violate a United Nations resolution that only “called upon” it not to conduct such tests. The rocket carrying the Payam satellite failed to reach the “necessary speed” in the third stage of its launch, Telecommunications Minister Mohammad Javad Azari Jahromi said. Jahromi said the rocket had successfully passed its first and second stages before developing problems in the third. That suggests something went wrong after the rocket pushed the satellite out of the Earth’s atmosphere. He did not elaborate on what caused the failure, but promised that Iranian scientists would continue their work. Iran had said that it plans to send two nonmilitary satellites, Payam and Doosti, into orbit. The Payam, which means “message” in Farsi, was an imagery satellite that Iranian officials said would help with farming and other activities. It’s unclear how the failure of the Payam will affect the launch timing for the Doosti, which means “friendship.” Jahromi wrote on Twitter that “Doosti is waiting for orbit,” without elaborating. Tuesday’s launch took place at Imam Khomeini Space Center in Iran’s Semnan province, a facility under the control of the country’s Defense Ministry, Jahromi said. Satellite images published last week and first reported by CNN showed activity at the launch site. Given the facility’s launching corridor, the satellite likely fell in the Indian Ocean. Iranian state television aired footage of its reporter narrating the launch of the Simorgh rocket, shouting over its roar that it sent “a message of the pride, self-confidence and willpower of Iranian youth to the world!” The TV footage shows the rocket becoming just a pinpoint of light in the darkened sky and not the moment of its failure. The Simorgh, meaning “phoenix” in Farsi, has been used in previous satellite launches. It is larger than an earlier model known as the Safir, or “ambassador,” that Iran previously used to launch satellites. Ahmad Motamedi, the chancellor of Tehran Amirkabir University of Technology, which designed the satellite, told the semi-official Mehr news agency that Jahromi already has ordered them to design another satellite. “Now, we have earned plenty of experience and we will be able to make a new satellite quicker,” he said. Over the past decade, Iran has sent several short-lived satellites into orbit and in 2013 launched a monkey into space. Iran usually displays space achievements in February during the anniversary of its 1979 Islamic Revolution. This year will mark the 40th anniversary of the revolution amid Iran facing increasing pressure from the US under the administration of President Donald Trump. Pompeo has said that Iran’s plans for sending satellites into orbit demonstrate the country’s defiance of a UN Security Council resolution that calls on Iran to undertake no activity related to ballistic missiles capable of delivering nuclear weapons. Pompeo alleged in a statement Tuesday that the vehicle that Iran tried to put into orbit uses technology that is “virtually identical and interchangeable with those used in ballistic missiles, including intercontinental ballistic missiles.” He said the US is working with its partners “to counter the entire range of the Islamic Republic’s threats, including its missile program, which threatens Europe and the Middle East.” In Israel, Prime Minister Benjamin Netanyahu promptly slammed Iran over the launch, accusing Tehran of lying and alleging that the “innocent satellite” was actually “the first stage of an intercontinental missile” Iran is developing in violation of international agreements. Iran denies wanting nuclear weapons. A 2015 nuclear deal it struck with world powers limited its enrichment of uranium in exchange for the lifting of economic sanctions. However, Trump pulled America out of the deal in May. While United Nations inspectors say Iran has honored the deal up to this point, the country has threatened to resume higher enrichment. On Tuesday, Iranian state television aired footage of nuclear chief Ali Akbar Salehi apparently from a previous interview warning Tehran could raise the its enrichment of uranium “instantly.” “In a matter of four days we (are able) to start,” he said.
#United States #Iran #United Nations #Tehran #Science #Middle East #nuclear weapons #Mike Pompeo
You May Also like: